Skynet
Z000.M was a Series 800 Terminatrix activated in a Skynet facility in response to an incursion by the Resistance cell led by Colonel Mary Randall into a fully functional Skynet network complex six months after John Connor destroyed the Master Control central node. Upon maturation, this unit was immediately deployed via TDE to reinforce C890.L in countering the human offensive. Z000.M's Infiltration outersheath model appeared as a large, muscular Caucasian female with long brown hair.

Within this facility was an operational Time Displacement Chamber, greater in scope than the prototype discovered by John Connor. Originally slated for a 30-strong last-ditch time travel mission by the remains of Skynet to wrest victory from the jaws of defeat and secure the dominion of Skynet over the timeline, human intervention caused the only three Infiltrator units to be activated and deployed early. 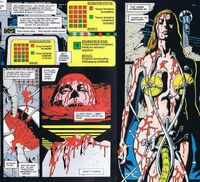 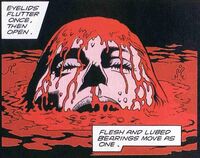 Z000.M after a misfired TDE arrival 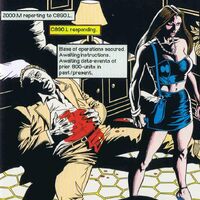