Terminator Wiki
Register
Don't have an account?
Sign In
Advertisement
in: Characters, Terminator 3: Rise of the Machines characters, Alive,
and 3 more

Sgt. Candy was selected by Cyber Research Systems as the physical model for the artificial skin of the Model 101 for the Terminators. Candy's jovial Southern voice, however, was replaced by Sherwood Olson, the assistant of Thomas Shelby. 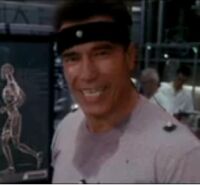 Voiceover: CRS, Cyber Research Systems, presents a preview of our upcoming product line. Say hello to the soldier of tomorrow; the T1 Battlefield Robot, a fully autonomous Ground Offensive System; and in the air, the Hunter Killer Aerial Weapons Platform. This isn't science fiction, it's realty thanks to our top secret innovation — Skynet — the revolutionary artificially intelligent Battlefield Management Network. From intercontinental missiles to the individual soldier in the field, Skynet is able to control them all.
General Brewster: Sorry I'm late, gentlemen.
Thomas Shelby: We just got started Bob, take a seat.
General Brewster: It's ok, proceed.
Voiceover: Great leaders aren't born they're made, right here with the technology developed at CRS. With the advent of exiting new technology, the loss of even one soldier in combat is intolerable.
General Brewster: You do know the patents were obtained from a private vendor, Cyberdyne?
Thomas Shelby: Cyberdyne!? That's ancient history!
Voiceover: Using designs generated by Skynet, we need no longer risk the well being of our men and women in uniform. Robots will take their place on the front line.
CMSgt. Candy: (with a thick Texan accent) Hi, I'm Chief Master Sergeant William Candy! I was honored to be selected by CRS in the ongoing effort to save American lives.
Thomas Shelby: I don't know about that accent.
Sherwood Olson: (Schwarzenegger's voice) We can fix it.
CMSgt. Candy: It is now within our power to make war safe, and that, is truly priceless. CRS brings you the face of the future. Ooo, it's me!