The Time Displacement Equipment (TDE), also known as Time Field Generator,[1] Time Displacement Device,[2], or Time Distortion Device[3], is a time machine utilized as a tactical time weapon[2] that allows living tissue and mimetic polyalloy to be sent backward and forward in time.

In the original timeline, the Time Displacement Complex is located in Los Angeles, with the TDE itself located deep underground, accessible by a long stainless steel elevator shaft. The TDE is located behind vault-like doors, in a large Time Displacement Chamber[4] the size of a high-school gym. At the center of the room's floor is a circular hole, with three enormous chrome rings inside it, suspended by a magnetic field. Individuals traveling through time must first be covered with a conductive substance so that the time-field will follow their outline, then step into the hole at the center of the inner ring, where they will be suspended like the rings. As the TDE is started up, the rings rotate around each other on different axes like a complex gyroscope, and the floor splits open like wedges of a pie which pull back from the center. The rings spin faster, and begin to descend into a vast circular space below. Lightning begins to arc in this space below as a charge builds up, and finally there is a blinding flash of light as the traveler is sent through time.[5] Reese himself explains to Sarah Connor that the experience is very painful.[2]

The TDE process is a one-way trip; once they travel back to the set time period, they are unable to return,[6] unless there is another TDE in the destination.[2][7][8][9] Only by constructing another TDE device, which requires a Terminator CPU chip,[2] may a subject go time travel.

What can be transported[]

In order for time travel to occur, the subject must be a living organism (or must be surrounded by living tissue) in order to generate the bioelectric field needed for the TDE to operate. Nothing else can go through time, not even clothes. However, there is some exception, such as dirt[10] or mimetic polyalloy.[11][12] In some timelines, when time allows, Resistance fighters often take their clothes off prior to entering a TDE departure zone to prevent the destruction of their limited possessions in the time travel process. These could still be useful for personnel left behind[13][2] since metal parts on clothing, gears, and weapons in magnetic field generated by TDE could be like tin foil in a microwave oven, which could cause a massive explosion.[2] While in some other timelines, the subject just walks into the TDE to be chronologically transported while their clothing and personal belongings are left behind.[14]

Skynet is able to send T-1000 Terminators back through time, while the T-Infinity, is able to travel without any problem by the onboard TDE — but as they do not possess living tissue. Though Kyle Reese stated that only living-organism can be sent through, it is possible he did not know much about tech stuff and was mistaken.[15] There have been few theories:

In the pilot episode of Terminator: The Sarah Connor Chronicles, a T-888 head is transported through time along with Sarah, John and Cameron. According to Josh Friedmann, immediately before the time travel, the head was covered in tissue that was then burnt off during time travel.[16] This could possibly be the way Skynet is able to send the T-1000 prototype and the T-X back in time without traces of cocoons being seen following time travel — a thin layer of skin covering the T-1000 is burnt off during time travel.

It should be noted that mimetic polyalloy can be destroyed in a prototype Time Vault Chamber.[7]

Furthermore, a T-3000 that has lost its human cellular covering is vulnerable to a Time Displacement Device, which can rip the machine apart beyond repair and destroy it altogether.[2] This could support the theory that by mimicking living tissue, both mimetic polyalloy and Machine-Phase Matter can produce the same field generated by a living organism needed for the time displacement to occur.

It is shown in multiple sources that the equipment can have errors, delivering subjects to either the wrong location, the wrong time, or both.

Kyle Reese mentioned that the Resistance used the TDE in the Resistance-occupied Skynet base to send him back to 1984. The plan was for Connor's unit to destroy the TDE right after sending Reese to prevent Skynet from using it again.

Sometime between 1963 and 1999, a person known only as the "Engineer" constructed Time Displacement Equipment in a bank vault with intention of being able to travel from the past to the future. It was used by the Connors and a Terminator named Cameron to travel to 2007 to escape the pursuing Cromartie and continue their mission to prevent Skynet's birth.[17] But for some strange reason, this particular use devastated the bank.[18] A contributing factor to this destruction may have been the simultaneous firing of an Isotope weapon from within the forming time sphere. Another may have been failure of the contemporary materials used in its construction.

In 2027, the Resistance was able to create their own time displacement machine from one of their bases. To stop Skynet from existing, Connor sent four men to 2007 to prepare to help his younger self and his mother. Cameron was probably sent through the device. In the series, resistance TDE operators are called Bubble Techs.

The Time Displacement Device, referred by John Connor as the ultimate weapon for last measure, was located in a facility disguised as a Skynet Work Camp built on the ruin of LAX in Los Angeles.[19] Knowing Skynet would surely fall on the night when he attacked on LAX, Connor himself did not join the Colorado unit to assault the Skynet Core. Instead, his force went straight to attack the LAX.

After learning that Skynet has sent back a T-800 back to kill Sarah Connor, Kyle Reese volunteers to go back and save her, but sees a T-5000 attacking John Connor and experiences an alternate reality where Judgment Day didn't happen in 1997, where his younger self relays a cryptic warning that "Genisys is Skynet." In the past he finds the timeline altered by the fact that Skynet sent a T-1000 back to kill Sarah in 1973 and she is protected by another T-800 known as the Guardian. They have built their own time displacement sphere and finish it with the CPU of the destroyed T-800, though the crude recreation would only last one trip. Sarah intended to use the machine to travel to 1997 to destroy Skynet. Realizing the timeline has been altered, Kyle is convinced that the future has changed due to the warning he received in his childhood vision. He convinces Sarah to travel forward to 2017 while the Guardian stays behind due to damage to its flesh, which will prevent it from being able to make the trip. In 2017, John Connor and the Dysons have created their own prototype Time Displacement Device, but during the battle to destroy Genisys, the Guardian destroys the T-3000 by sending it into the prototype activating it, causing the machine's magnetic field to rip the T-3000 apart and then explode due to the inorganic material that enters it (It had already been established that the machinery at this point was merely capable of generating the energy field rather than a full time portal). The explosion sets off all the charges planted to destroy the facility as well. Terminator Genisys

In 2042, Grace Harper and her unit captured a TD Chamber, neutralizing every unit within the chamber. However, they found that a Rev-9 had been sent back in time to 2020 to kill the younger Dani Ramos. Grace volunteered for the time travel mission to 2020 to protect the younger Dani, while Dani was reluctant but granted her request after Grace's begging.[20] Terminator: Dark Fate 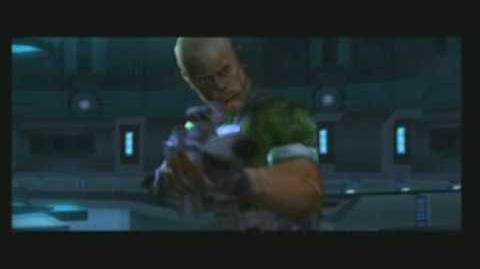 TDE display from the pilot episode.