In the Year of Darkness, 2029, the rulers of this planet devised the ultimate plan. They would reshape the Future by changing the Past. The plan required something that felt no pity. No pain. No fear. Something unstoppable. They created THE TERMINATOR.

Note: The novel shares the same story with the film The Terminator, although there are differences between the two.

Differences between the film and novelEdit 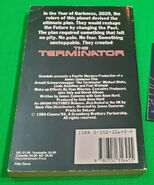 The Terminator by Shaun Hutson (1985)

The Terminator by Randall Frakes and Bill Wisher (Nov 1985)

Terminator 3: Rise of the Machines by David Hagberg (2003)