This article is a stub. You can help the Terminator Wiki by expanding it. 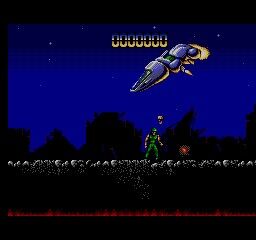 The Terminator, released in 1992, is a video game published by Virgin games for the Sega Mega Drive/Genesis console.

The game is a side-scrolling platformer, and follows the same plot as the first film. The player is Kyle Reese, who travels into the past to find and protect Sarah Connor, and stop the Terminator.

There are four different missions in the game, each representing key scenes from the film. The player starts in the future, then continues to the city streets in the past. The player must then escape a police station, and fight the Terminator in the factory.

This game was also released on the Sega Game Gear and Master System, and a revamped version was released for Sega CD.

Retrieved from "https://terminator.fandom.com/wiki/The_Terminator_(Genesis)?oldid=78573"
Community content is available under CC-BY-SA unless otherwise noted.