A nine-man Resistance cell led by Colonel Mary Randall assaults a fully functional Skynet network complex 6 months after John Connor destroyed the Master Control central node. Within this facility is an operational Time Displacement Chamber, greater in scope than the prototype discovered by John Connor. Their mission is to utilize the TDE to return to 1984 [1] and eliminate Skynet by killing key individuals in the Cyberdyne Systems hierarchy. The members of the cell who survive to reach the TDE chamber take off their clothes, as they would otherwise be destroyed during the time travel process, even though their mission intent was to also destroy the facility after their departure.[2]

I825.M, a short stocky individual with a scarred face observes the infiltration of the cell but does not interfere directly. After reporting the infiltration to the Processing Command Center of the facility he heads for the Incubation Chamber to activate defenders for the facility. Only 3 units are available for immediate activation; C890.L, C850.D, and HC875.S.

3 members of the team are killed during the assault, leaving the technician, Lieutenant Koufaks to initiate the TDE and send the remaining 5 members of the team to the past. His orders were to destroy the unit in order to prevent any Skynet assets from following. Unfortunately for Koufaks, just as he began shooting the controls for the TDE, three Terminators activated by I825.M capture him. After interrogation, the Terminators elect to use Koufaks as a gun cabinet, slicing open his belly and inserting a Plasma Pistol, then cauterizing the wound shut.

The Terminators take Koufaks with them to the past with the partially repaired TDE. The damage he was able to inflict locked the target time coordinates for the unit. Upon arrival in the past, C890.L ripped the Plasma Pistol out of the poor lieutenant's body, terminating him.

After arriving in 1984, Mary directs her team to acquire clothing, weapons, food, and housing. Then initiates surveillance on Cyberdyne to acquire targets needed to preemt the Skynet genesis. Mary gets a job as a waitress in the "Oboy" diner nearby the Cyberdyne Systems facility. After enticing Dr. Ed Astin into a date, Mary and Alan kidnap Astin and force him to take them to the residence of Dr. Bertram Hollister.

While the resistance cell has been acquiring its targets and establishing their Safe House, the Terminators have been working to identify the individuals they must protect from the scant information Koufaks revealed during his interrogation. I825.M coincidentally is camouflaged as a cook in the "Oboy" diner Mary is working at and impersonates a police officer over the phone to the DMV in order to get vehicle registration information about the only Cyberdyne Systems name they have, Hollister. While I825.M exercises his intelligence protocols to identify and follow Dr Hollister to his home, the other Terminators assault an LAPD drug bust to acquire weapons and additional disguises.

Just as Mary and Alan invade Dr. Hollister's home with Dr. Astin in tow and prepare to assassinate him, the Terminators attack and Alan is killed by C890.L with the Plasma Pistol. Astin and Mary flee with HC875.S in pursuit, but are able to get away when it's leg begins to malfunction due to prior damage, impeding it's mobility. C890.L and C850.D sequester Dr. Hollister in his secret warehouse laboratory for his safety.

Mary takes Astin to her safe house and they confront him with the knowledge of the Future, Judgment Day, and the implications of Project Bellerophon for the genesis of Skynet, still disbelieving, he storms off on his own.

Dr. Hollister thanks the Terminators for their protection, but feels he is unable to continue his work without the debris he was studying to advance his company's research. C890.L states they have been instructed to assist him in any way possible and offers to get Hollister anything he needs. He requessts the evidence held in the basement evidence storage of the LAPD. C850.D is sent to secure the materials.

Astin heads back to Cyberdyne Systems but is confronted by C890.L and flees under fire, heading directly back to the Resistance Safe House. This is unfortunately the intent of the Terminator, who discretely follows all the way to the location. In the battle that ensues, Naiomi and Raul are killed, and all of the remaining flesh covering on HC875.S is removed by a pipe bomb. Mary, Bart and Astin escape undetected and C890.L assumes all targets have been terminated.

Meanwhile the surviving resistance members turn the tables and track C890.L to the warehouse lab. HC875.S sneaks out of the wreckage of the destroyed safe house and steals a car in order to rejoin its other units with Hollister. Thinking they are the only functional Terminators in the past, they are momentarily stunned to find that the requested evidence is actually the remains of the Series 800 Terminator destroyed by Sarah Connor during the events of The Terminator. 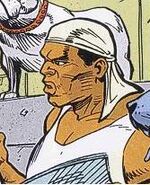 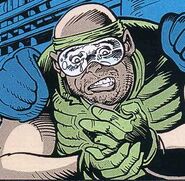 Lieutenant Koufaks, technician, used by Skynet to carry a Plasma Pistol to the past. Terminated by C890.L

Captain Blake, killed when assaulting the TDE in the hallway

Stainor, killed when assaulting the TDE in the TDE chamber
Add a photo to this gallery 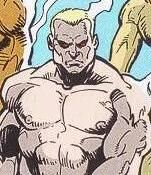 There are four issues.

Retrieved from "https://terminator.fandom.com/wiki/The_Terminator:_Tempest?oldid=104237"
Community content is available under CC-BY-SA unless otherwise noted.