The Terminator: SkyNET, also simply known as SkyNET in North America, is a first-person shooter developed by Bethesda Softworks in 1996.

Official description from the game's back cover:

Return to the apocalyptic world of the post-nuclear future... but this time you won't be going in alone. Now you can join up and kill everything and everyone in the ultimate multiplayer deathmatch over a LAN or the Internet. Leap across rooftops to lie in wait, ambush from the rear in your captured jeep, or attack from the sky in an HK fighter! SkyNet -- No Limits!

As a member of the Resistance movement, you are sent on a reconnaissance mission to infiltrate a secret robot complex. What you find there leads you on a break-neck series of missions, each one more critical and deadly than the last. SkyNet gives you the best of both worlds: intense single player, solo missions that push your skills to the edge, and the most explosive multi-player combat experience ever created!

It featured SVGA graphics at 640x480 resolution (which was state-of-the-art in 1996), full multiplayer support (through LAN or modem), and fully customizable multiplayer maps.

SkyNET is played in the first-person perspective at all times, and was one of the first FPS games to use the now standard control setup with the keyboard controlling movement while the mouse controls the direction in which the player is looking. Each of the eight levels in the game requires the player to solve a number of objectives before continuing to the next level, while fighting enemy terminators with a wide variety of guns and grenades. Another obstacle in each level is the harsh terrain, as many areas contain too much radiation for the player character to remain alive. The terrain is navigated in three ways, 'on foot', in a jeep with a mounted cannon, or in an Aerial Hunter Killer. Before each mission, you are given a briefing via a full motion live-action video cutscene.

SkyNET features a deathmatch mode, which allows players to fight in a number of maps as either a human or a terminator.

SkyNET is driven by Bethsoft's XnGine, which was one of the first game engines to have the following features: Full 3D perspective, real-time light sources, and full texturing.

While the majority of the game uses textured polygons to display levels and structures, many of the items, weapons, and level decorations are still shown using older sprite technology.

SkyNET is playable in both 320x200 and 640x480 display resolutions. If The Terminator: Future Shock is installed on the computer, then it can be launched to play in these resolutions as well. Originally Future Shock was only playable in 320x200. [1] 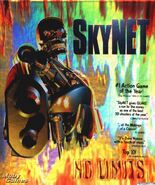 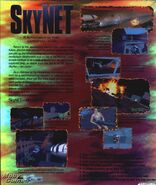 SkyNET alternate box back.
Add a photo to this gallery

Retrieved from "https://terminator.fandom.com/wiki/The_Terminator:_SkyNET?oldid=88270"
Community content is available under CC-BY-SA unless otherwise noted.