The Terminator: Rampage is a DOS based first-person shooter developed and published by Bethesda Softworks in 1993 and serves as the sequel to The Terminator: 2029. The game originally appeared on 3.5" floppy and later on CD-ROM. The gameplay is similar to Wolfenstein 3D, although it also features some elements of a dungeon crawl.

On the brink of defeat by the Resistance, Skynet uses the Time Displacement Equipment to send a data module containing a complete copy of its program into the past. Arriving at Cyberdyne Systems headquarters, it assumes control of the building and begins using its facilities to build an army of Terminators.

The player assumes control of a Tech-Com soldier, sent through time by John Connor, in an effort to thwart Skynet and its plans to make war on the past.

To stop Skynet, the player must explore the various floors of the Cyberdyne building, fighting off Skynet robots. The player is required to assemble the pieces of a prototype plasma rifle, the only weapon capable of harming the Meta-Node, a large robot armed with pulse cannons.

The game's levels are grid-based 3D mazes, similar in design to Wolfenstein 3D. The player must explore each level searching for the stairs that lead to the next level, with the game's final boss, the Meta-Node (the Skynet computer core) located at the deepest level of the building. The game contains dungeon crawl elements, as the nature of the game's maze-like levels will sometimes require players to back-track between levels in order to access previously inaccessible areas of a level. Exploration of the game's levels is required to finish the game, as the player must collect and assemble various scattered pieces of the plasma rifle in order to defeat the final boss.[1]

The Terminator: Rampage back cover 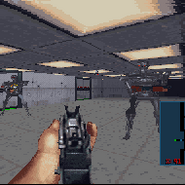 Retrieved from "https://terminator.fandom.com/wiki/The_Terminator:_Rampage?oldid=101806"
Community content is available under CC-BY-SA unless otherwise noted.