Terminator Wiki
Register
Don't have an account?
Sign In
Advertisement
in: The Terminator: Dawn of Fate, Video game titles

ESRB: T (Teen)
The Terminator: Dawn of Fate is a 2002 video game made for PlayStation 2 and Xbox. The main plot centers around the event leading to Colorado Offence, the final attack on Skynet, by the Resistance in the year 2027 during the Future War in the Original timeline.

In 2027, Tech-Com commander John Connor is making one of the last offenses against Skynet main complex in Cheyenne Mountain. However, few days prior to the operation, the Resistance Headquarters was under attacked by Skynet force, starting with a T-800 Infiltrator that infiltrated the base.

Grave Introduction
Following a Skynet invasion of the Resistance Headquarter that began with a T-800, Kyle Reese must escort John Connor to safety.

Final Delivery
While trying to escape the base, Kyle Reese and John Connor are separated. While Connor continues to the exit, Reese tries to rescue trapped soldiers from Skynet.

Mass Destruction
After Connor escapes to safety, Justin Perry and a Tech-Com demolitions specialist go back into the base to destroy it before Skynet can learn of the Resistance's plans to attack Cheyenne Mountain.
Boss: HK-Tank

Enemy Withdrawal
Justin Perry is assigned to investigate the Skynet presence in the ruins of the Federal Reserve in Los Angeles.

Loading Zone
While following a group of Auto Palettes to their source, Perry pursues Alexander Stone through the sewers.
Boss: Loader

Cybernetic Surprise
While en route back to his base, Kyle Reese is attacked by a new line of Skynet assault forces: the Skynet Initiate and captured.

Asylum Assault
After Kyle Reese is captured by Skynet, Catherine Luna is dispatched to rescue him from a Skynet Work Camp in the ruins of Los Angeles.
Boss: Alexander Stone

Infiltration
After rescuing Kyle Reese in the Skynet-run Asylum, Catherine Luna is attacked by a T-800 Infiltrator.
Boss: Terminator

Time Displaced
After a T-800 is sent back through time and his team is disabled, Kyle Reese must battle his way to the Skynet Brain and destroy it so that he can rescue his friends and travel to 1984 to protect Sarah Connor.
Boss: Guardians and Skynet Brain.

Some interesting things that set this game apart from other Terminator games is that players get to see several never before seen Terminator units such as the T-400 and T-500. Additionally, the inclusion of melee combat changes the ways a player can exterminate the Terminators. The camera angles used in this game proves to be unique but feel poorly implemented as the camera feels like its never looking the right way, and also is very "sticky".

There are fifteen different weapons at the players disposal, including:

A pair of futuristic, fully automatic akimbo pistols. These pistols have a very high rate of fire, but is unfortunately less effective on Terminator units then the other weapons available.

A small (and presumably light) hand-held rocket launcher, in the form of a Pistol. This weapon is exclusive to Captain Perry, and is only available when playing as him in certain stages of the game. The R-6 packs a heavy punch, and can easily destroy any Terminator unit in just one-two shots (except the T-800, which sometimes take three shots).

A throw able high-explosive bomb in the form of a canister. This weapon had its first appearance in The Terminator, making it one of the few weapons that are seen in films.

A quite bulky looking laser rifle with a mounted scope (the scope is never used). This is probably one of the best weapons in the game, having a pretty devastating effect on Terminator units alike. The PLM40 is not to be confused with the M-25 Phased Plasma Rifle, which is unavailable to the player 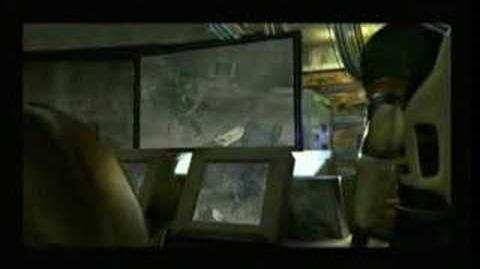