Single player
The Terminator: 2029 is a DOS first-person shooter game developed and published by Bethesda Softworks in 1992. Based on Terminator film series, the player assumes the role of a member of John Connor's Special Operations Group in Resistance and engage enemy in ACE Battle Armor. The objective of the game is to destroy Skynet. Although the game is played from a first-person perspective, gameplay is restricted to four directions as turning spins the player around by 90 degrees. Though lacking the smooth-scrolling movement of modern FPSs, the game was generally well received; mostly due to the fact that it put the player (whose name was customizable) right in the action of the War against The Machines.

An extra add-on mission pack with new levels and enemies, titled Operation Scour, was also released. The Deluxe CD version is slightly different from the original diskette version; it has fully voiced dialog and different music. In the diskette version, the player can use their own custom callsign as well as their name.

The Terminator: 2029 featured 16-bit graphics. Resolution was 640x480 with 256 colors. Cutscenes shown in the game were of fairly good quality, and the player/NPC interaction screens were notable for the time. The final cutscene, if the game is completed, features the destruction of Skynet itself; which in this game exists as a satellite in orbit around Earth.

The player uses the arrow keys to move around in a grid-like fashion (non-scrolling, as in a standard FPS). The cross-hairs were moved using the mouse, with the left button being the trigger. 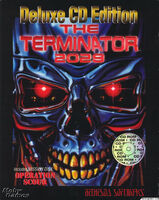 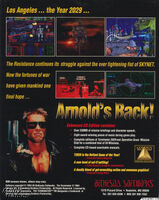 Retrieved from "https://terminator.fandom.com/wiki/The_Terminator:_2029_(video_game)?oldid=103854"
Community content is available under CC-BY-SA unless otherwise noted.