Skynet
The "Bedell Terminator" was a T-888 Terminator[1] sent from the future by Skynet to terminate Martin Bedell, with a secondary mission to terminate John Connor.

Following a systematic and direct approach identical to that of the original Terminator, the Terminator began systematically terminating all the Martin Bedells in Los Angeles.

The Bedell Terminator was assigned to terminate Martin Bedell, an influential member of the Resistance who directly helped John Connor with the creation of Resistance after the initial breakout from Century Work Camp.

The Terminator's linear approach took it first to the backyard barbecue of Mr. Martin Bedell, and later to the house of young Marty Bedell. Sarah Connor and Cameron rescued the second target. Following up on the third and final Bedell, the Terminator discovered his location at Presidio Alto and proceeded there to complete its mission.

Ignoring the rest of the members of Bedell's squad, the Terminator walked straight into the prepared ambush of Derek Reese. Firing a Raufoss Mark 211 round into its head sparked the Terminator into pursuit of Reese. After being led into another ambush of claymore mines, the Terminator was downed for a moment. When a shocked Martin Bedell fell trying to escape, John Connor revealed himself to the machine, initiating an instant priority target override. Pursuing John Connor deeper into the woods, the Terminator was led onto a narrow plank over a tar pit. Precariously balanced, the Terminator fell prey to three rapid shots from Derek's Barrett .50 caliber sniper rifle and fell into the pit. Caught in the tar, the unit was terminated by a point blank shot with another HEI/AP round that took off the entire right half of the head, including the Neural Net CPU housing. The endoskeleton was then disposed of by dropping a thermite charge into the pit with it, melting it as it sank into the burning tar. "Goodbye to All That" 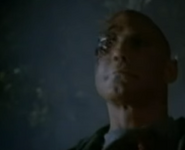 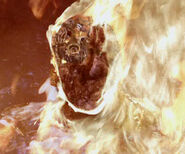