Edit
watch 01:25
Jurassic World: Dominion Dominates Fandom Wikis - The Loop
Do you like this video?
Play Sound
This page needs to be cleaned up. Please improve this page in any way that you can.

Several Terminator video games have been released, from arcade games to first person shooters. This list of Terminator video games includes video games based on the 1984 film The Terminator, a science fiction action film that has been followed by four sequels. Some of the games follow part of the plot of the films. The characters and related events are described, below, using in-universe tone

The first three films featured the concept of a "Terminator", specifically the titular character, a virtually unstoppable cyborg assassin who is sent back from the year 2029 by a race of artificially intelligent, computer-controlled machines bent on the extermination of mankind. The Terminator mission is to prevent Sarah Connor's son, John Connor, from forming a resistance against the machines. Rebel Kyle Reese tries to stop the Terminator. The first film became a pop-culture phenomenon, leading to various computer and video games. The games are either based directly on the movies or are heavily involved in the film series' expanded universe.

This game was written in 100% assembly and takes up more than 35000 lines. The game contains approximately 20000 3D objects. It was developed using Turbo Assembler and Turbo Debugger with all debugging being done remotely. It was created on a variety of 286 and 386 computers. All graphics were created on IBMs and Amigas using DPIII and DA. More than 700 frames of animations were created. The delta mode compression yielded a 100 to 1 ratio.

Here's the main the article first. After you read that, you can read this, too. A Terminator game for the NES platform had been in development since 1989. Sunsoft's game, Journey to Silius, was originally conceived as a game based on the original film. The license expired during production and the final game altered its graphics and created its own storyline. A NES game was eventually developed and released in December 1992, it is a side-scrolling platformer developed by Radical Entertainment and published by Mindscape and Bethesda Softworks. A side-scroller released in December 1992. The player is Kyle Reese, starting in the future, with a gun and grenades, fightingTerminators. The game was criticized for its poor graphics and audio, and for its extreme difficulty due to a lack of continues should the player lose all their lives. The game consists of platforming and driving stages. It is considered one of the worst Terminator games.

Genesis version was released by Virgin Games in 1992, and converted to the Game Gear and Master System.

The Mega-CD/Sega CD version was entirely remade with new levels, and was released in 1993.

The SNES version is a side-scrolling shooter developed by Gray Matter and published by Mindscape in 1993 for the Super Nintendo. The player plays as Kyle Reese who must save Sarah Connor from the Terminator. The main levels are side-scrolling shooters, the two sub-levels are pseudo-driving levels, where the player has to shoot the Terminator to stop him from shooting back. The game is very difficult, due to the length of the levels and the fact that the player gets no continues if losing all lives. There is minimal music in the game, as the sound effects tend to be much louder.

A shooter released in 2003 by In-Fusio for Mobile phone platforms BREW, ExEn, and Java ME.

An Action/Adventure, platformer, shooter, beat 'em up that was released on NES and then ported to Sega Game Gear and Master System. Developed by Software Creations and published by LJN on NES and by Flying Edge on Sega systems. It is based on the film of the same name.

The game consists of five levels. Level 2 is an isometric racing game, whereupon the player must race fast enough to catch John Connor on his moped whilst using weapons to beat back the T-1000, who is fast approaching in a tractor trailer. All the other levels are side-scrolling platform, shooters/beat 'em ups. Level 2 is omitted from the Master System and Game Gear versions. From Level 3 onward, the player is not allowed to kill human enemies, to which he will be rewarded with upgraded weaponry at the end of levels for doing so. Level 4 requires the player to visit all ends of the gamescreen in order to collect and set explosive charges. Levels 5 has the player doing some platforming, before finally taking on the T-1000 in the final battle.

An action game with side-scrolling and top-down perspective levels that was published by Ocean Software and developed by Dementia. The game was released in 1991 for the Amiga, Amstrad CPC, Atari ST, Commodore 64, DOS, and ZX Spectrum. Each version features very similar levels. Versions of the game for the aging Commodore 64 and ZX Spectrum featured very primitive graphics, compared to the other platform releases.

The game is loosely based on the film of the same name. The objective is to save the leader of the Human Resistance, John Connor, and his mother, Sarah, from the T-1000, a mimetic poly-alloy Terminator, bent on killing them both.

Colin Campbell of Amiga Power gave the Amiga version a 65 percent rating and called it, "A typical movie licence in just about every sense. It follows the plot closely, gives you a lot of sub games for your money, even provides a few digitised animations," but also wrote, "There really isn't much in the way of worthwhile gameplay in here.

A pinball game designed by Steve Ritchie and released by Williams Electronics in 1991. A follow-up to this game is Rise of the Machines, featuring a very similar playfield design and rulesheet.

One plays as the T-800 sent back in time to 1995, in order to protect John and Sarah Connor from the T-1000. There are two gameplay types: side-scrolling and driving. During the side-scrolling levels, the player's objective is to locate and retrieve all future objects, which are gray boxes with a flashing light on top, that, when broken open, look like endoskulls. The player must complete all objectives for that mission. Once all objectives are completed, the player goes back to the beginning of the level to finish the mission. Between the side-scrolling levels are the driving levels. During the driving levels, the player's objective is to drive to the next mission location by following compass directions, while avoiding pursuers.

Starting with Level 3, the T-1000 will appear (or Level 2 if the alarm is tripped or too much time is spent there). The T-1000 attacks using a pistol and arms morphed into stabbing weapons. The T-1000 will mold back into shape if shot, but it will be temporarily incapacitated if it suffers enough damage. The T-1000 does not appear in level 6.

The T-800 must also protect John Connor starting with Level 3, and Sarah Connor starting with Level 4. If either one loses all of their health, they will start dying, and the T-800 must heal them by ducking down over them and transferring some of its health to them. If they are left alone for too long, they die, and the game ends. However, Sarah Connor wields a pistol for extra defense. Neither one appears in levels 5 or 6.

Both versions have different musical instrumentation, different sound effects, and some minor graphical and control differences, but are otherwise identical.

Brett Alan Weiss of AllGame gave the Super NES version one and a half stars and said the game was on his list of least favorite 16-bit film-based games. Weiss said, "Although it's pretty easy to figure out given a little time, it's not always readily apparent exactly where you're supposed to go or in what order you must do things within each level. Another thing I can say about this game that doesn't sound completely incendiary is that it does a reasonably good job of following the storyline. Oh, and the music's not too bad, either. It can get a little repetitive, and it may grate on some people's nerves after a while, but it rocks pretty hard, as music in a game of this type should." Weiss also said, "Large areas of blank space (such as the blue backgrounds on level one and the brown walls in level four) hurt this game's visual appeal tremendously, and it's not that great looking to begin with."

Weiss gave the Genesis version one star out of five and wrote, "T2: Judgment Day for the Genesis is a truly wretched gaming experience. [...]. It does follow the storyline reasonably well, and you may be interested in playing the game through once, just to see what there is to see, but you won't have a good time doing it. [...]. The graphics are barren in many places and ugly in most others. The sound effects are limp, and the music is in-your-face annoying. The controls are awful. The punching and kicking in this game is less convincing than that of most bad 8-bit games." Weiss said the Super NES version "is superior in every way. While still a lousy game, it has better graphics, music, and sound effects." In both reviews, Weiss negatively compared the game to Last Action Hero and Lethal Weapon.

Developed by Isle of Man based betting software developer Microgaming and released in June 2014, this video slot game is a 5 reel online slot machine with a feature free spins bonus with a T-1000 theme. Microgaming CEO Roger Raatgever said, "We've taken the core elements of the iconic Terminator 2 film to create an online slot that does the brand justice. Visually it is stunning and it has a fitting game mechanic that is completely unique to the online gaming market. Our operators and their players will be awestruck by our creation; we are incredibly excited about the game launch today."

Terminator 3: War of the Machines (Windows)[]

Terminator 3: Rise of the Machines (pinball)[]

A pinball game manufactured by Stern Pinball for release in 2003. It is based on the movie of the same name.

The playfield design is similar to Terminator 2: Judgment Day pinball, with the exception of the ball cannon on the right side, which is replaced by the RPG minigame in the backbox.

The purpose in the game is to light the following features to engage in a "Final Battle" (the wizard mode) with the T-X:

A mobile game developed and published by Glu Games was released in 2015. It is based on the film of the same name. It is a free-to-play third person shooter with micro-transactions that include new characters and weapons.

Main article: RoboCop versus The Terminator

A shoot 'em up mobile phone game developed and Published by In-Fusio in 2005.

A first person shooter fan game developed by The Original Studios made in 2011 with Unreal Development Kit. The action takes place in the year 2029, on Los Angeles. The player assumes the role of a survivor mid-fight. The game was in alpha stage (2.0.1) when all development on it ceased and it was abandoned. 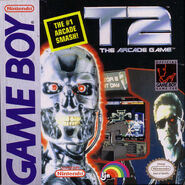