Terminator Revenge is a mobile phone game developed by In-Fusio in 2006.

The player assumes control of a T-800 unit, programmed to terminate a Resistance scientist, who was sent back through time to discover Terminator weaknesses by experimenting on the remains of the Terminator crushed in the first Terminator film.

Using a number of weapons, the player must defeat both Resistance soldiers and (apparently) captured HKs, as well as find keycards to unlock new areas.

In 1984 A.D., the military seized the remaining parts of the T-800 Terminator sent back by Skynet from the future to kill Sarah Connor — mother of the Resistance leader, John Connor.

Intelligence shows that these parts were stolen by a band of environmental scientists in 1992, motivated by the result of their scenario analysis. These scientists believed that, would this technology remain in the wrong hand, it would ultimately lead to the annihilation of mankind. These scientists later joined John Connor and the Resistance.

In 2029, a war between man and machine has laid the world in ruins. Skynet has grown strong by now but is loosing the battle due to research obtained by the Resistance in the past. To prevent this, Skynet send another Terminator back in time to set the future back on track... 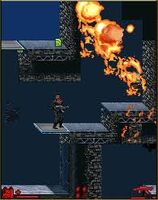 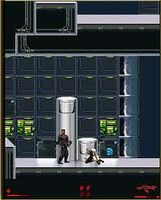 Retrieved from "https://terminator.fandom.com/wiki/Terminator_Revenge?oldid=103101"
Community content is available under CC-BY-SA unless otherwise noted.