Terminator Wiki
Register
Don't have an account?
Sign In
Advertisement
in: Terminator 3: Rise of the Machines, Video game titles

Terminator 3: Rise of the Machines is a video game based on the film of the same name, released on Playstation 2 and Xbox. It is a first-person shooter with elements of hand to hand combat in third person perspective. A version was released for the Game Boy Advance on November 18, 2003, as an isometric shooter. A puzzle game was also released for mobile phones. The game was also going to be launched for GameCube but was canceled for that console. Both the PS2/Xbox and GBA versions received mostly negative reviews, with the PS2/Xbox version being more poorly received than than the GBA game.

The game was followed by Terminator 3: The Redemption in 2004, another game based on the third film, which received mixed but mostly superior reviews in return.

The GBA version is an isometric shooter. The player is a Terminator, completing missions and destroying the machines. The Terminator is equipped with a variety of weapons and explosives. Hints and access cards can be received from humans.

The game has a password system for entering codes. Bonus codes can be obtained from completing missions. 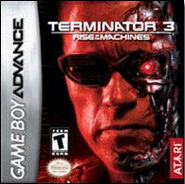 Differences between the film and video game[]