Edit
watch 03:36
Wiki Targeted (Entertainment)
Do you like this video?
Play Sound
This page needs to be cleaned up. Please improve this page in any way that you can.

Terminator 2: Judgment Day - The Arcade Game, also known as T2: The Arcade Game on home consoles, is an on-rails arcade shooter. It was released by WMS Industries. The game has been rated "R" (for Righteous) by the Motion Picture Gaming Association of America.

The player takes the role of The Terminator, already captured and reprogrammed by the Human Resistance, and fights alongside them against Skynet in the year 2029. Eventually, The Terminator and John Connor penetrate Skynet's headquarters and destroy the system CPU. Discovering the time displacement equipment, The Terminator is sent back through time to when John was a child with the mission to protect him from the T-1000 that Skynet had also sent back. In the past, The Terminator, John, and Sarah Connor launch an attack on Cyberdyne Systems in order to prevent the development and creation of Skynet.

The T-1000 catches up to the group and pursues them in a police helicopter and a liquid nitrogen truck. The Terminator is able to freeze and shatter the T-1000 with the liquid nitrogen, but, it re-liquefies itself and continues to pursue John. Ultimately, The Terminator is able to blast the T-1000 into a pool of molten steel and save John. Depending on how much damage the player inflicts at Cyberdyne, Judgment Day will either be averted or research at Cyberdyne will continue, allowing Judgment Day to possibly still happen.

Running on the once-popular Williams/Midway Y-Unit arcade hardware and currently Midway X-Unit, the 2 players essentially take part in controlling a T-800 model and gun down the terminators of the opposing side. The game utilizes a first-person perspective, like the rest of the games in the genre.

In single player mode and in the ports, the player must simply target and destroy incoming enemies such as the Terminators and flying HKs. Bonuses are obtained from boxes at the bottom of the screen. At the end of stages are large bosses, which must be defeated to advance to the next stage.

In the original coin-op version of the game, if one presses the Player-1 or Player-2 'Start' button during the attract mode without paying, Arnold Schwarzenegger would remark "No way, Jose!"

What was noteworthy about T2 was the use of digitized actors from footage specially shot during the making of the film. This made for realistic 2D sprites in a Light gun game for the time. Arnold Schwarzenegger, Robert Patrick, and Eddie Furlong all reprised their respective roles for the making of the arcade game. Linda Hamilton did not lend her likeness as Sarah Connor in any footage of the game; she is instead played by Debbie Evans.

The game was retitled to T2: The Arcade Game to avoid conflict with the platform game. Players would mainly control the gun cursor with the control pad in the ports. It was converted to the Sega Mega Drive/Genesis, SNES, Amiga, Game Boy, Game Gear, Master System, and PC MS-DOS.

The Mega Drive/Genesis version could not do scaling due to hardware limitations, and many of the images were redrawn at different sizes.

The MS-DOS port of the game was very loyal to the arcade game in terms of graphics and speed. However, it was notoriously difficult to run because of the high amount of conventional memory needed to run (580K out of 640K) and would usually need either a boot disk or memory tweaking (or both) in order to load. 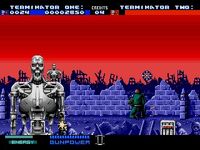 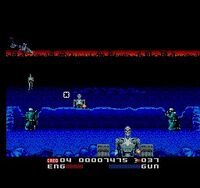 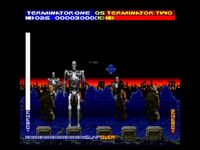 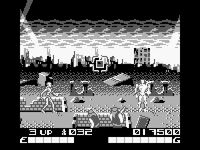