Terminator: Revolution is a comic book published by Dynamite Entertainment by the creator Simon Furman and Lui Antonio. It is the second part of the T2 Saga and serves as a sequel to the comic Terminator 2: Infinity. 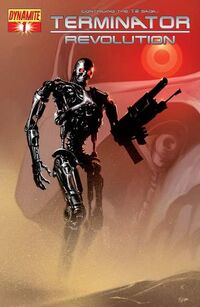 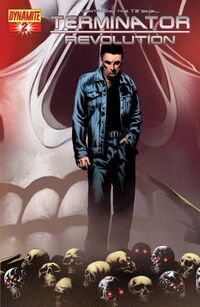 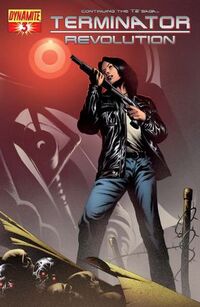 This series consist of five issues.

Skynet sends the T-Infinity to the year 2015 in order to kill Tara Connor.

John Connor uses EMP pulse gun to disable the T-Infinity. He then use a steel bar to attack the machine, only to cause the TDE on board the machine to malfunction. Thus, John Connor and the T-Infinity respectively travel back to New Orleans and Alabama in 1996 accidentally.

Unable to locate the T-Infinity, Skynet becomes fear if the machine has been captured by the Resistance. Thus, the Dire Wolf is sent to destroy the T-Infinity in 2015.

While in 1996, the young John is attacked by a squad of T-850 Infiltrator on his way to school. He is saved by his older self and believes he is a reprogrammed Terminator sent to protect him.

As for the T-Infinity, it arrives Birmingham, Alabama. The malfunction has caused a confusion within its system, thus its mission priority becomes Sarah Connor.

In 1996, Sarah Connor is attacked by the T-Infinity. She manages to escape, but only to confront a squad of T-850 Terminator on the street.

Sarah Connor is saved when the T-Infinity starts to attack the T-850s. Sarah join John and his younger self and heads to their hideout in the woods.

While in 2015, the Dire Wolf enters Skynet Research & Development facility after destroying the machines that guard the facility. he Dire Wolf set the destination to Cahaba Road, Alabama in 1996. Kyle Reese tracks the machine down to the TDE room and is going to destroy it with a sniper riffle. The Dire Wolf notices and attacks Kyle before he can pull the trigger. Kyle tries to escape, only to enter the time displacement sphere. Soon after Kyle enter the time displacement sphere, the Dire Wolf enters it.