PEGI 16/ ESRB 17+
USK 16/ AUS 15+
Terminator: Resistance is a video game based on James Cameron’s sci-fi Terminator series. The game was released in the EU and Australia on November 15, 2019. On November 14, the PC version was released in the United States through Steam, while other versions released on January 7, 2020. The Enhanced Edition released on April 30th, 2021 on the PS5. The Infiltrator Mode and Annihilation Line DLCs are exclusive on the PS5, PC, and Steam versions.

Terminator: Resistance is an officially licensed, first-person shooter set during the "Future War" scenario that was only glimpsed at in the iconic films from James Cameron, The Terminator and T2: Judgment Day.

This story takes place in a post-apocalyptic Los Angeles, nearly 30 years after Judgement Day, and stars a brand new hero in the Terminator universe, Jacob Rivers, a soldier in the Resistance led by John Connor. Despite the fact that Jacob is just a lowly private, he’ll soon discover that he’s been specifically targeted by the latest threat from Skynet and marked for termination!

Skynet may be destined to lose the war, but at what cost to Jacob? Experience the events leading up to the decisive final battle for the fate of mankind in the war against the machines!

Terminator: Resistance is a single-player FPS set 30 years after the Judgement Day apocalypse. In the grim, skull-carpeted wastes of future Los Angeles, players will take on the role of Private Jacob Rivers, a member of the Resistance Pacific Division who finds himself the latest target of Skynet.

A mix of main and side quests will allow you to control Rivers as you see fit - as a plasma gun-wielding run-and-gunner, or a sneaky hacker - and scraps found along the way can be traded or crafted into useful gear. Skills can be levelled up to mold Rivers into the soldier that is needed to destroy the Skynet Defense Grid and bring the AI apocalypse to a halt.

Terminator: Resistance features multiple endings, which makes sense for a game set in a series with a multitude of timelines. Protecting your team of surviving resistance members will help dictate where the story goes.

Developed by Teyon, Terminator: Resistance will be published by Reef Entertainment and released on November 15 in Europe and Australia. A North American release happened on 14 for Steam, and on January 7, 2020 for consoles due to unforeseen manufacturing delays.

Eventually, on November 5th, 2020, a Steam and PC exclusive DLC was released. Called Terminator: Resistance Infiltrator Mode, it allows you to take control of a T-800 Infiltrator as you attempt to hunt down and terminate Resistance Tech-Com Commander Ramirez. Like in the real game, there is a mix of main and side quests. You can progress with the story as well as explore your surroundings, all the while neutralizing scavenger and Resistance patrols, gathering enemy intel, breaching and killing the occupants of scavenger or Resistance shelters, bunkers, hideouts, etc., and collecting weapons, as well as new weapons not wielded in the original game. And, if you are killed, you will respawn at the same starting point and will have to start all over again.

On December 10th, another DLC, Terminator: Resistance Annihilation Line, will be released. In it, players will once again take control of Jacob Rivers, who has been orderded by John Connor to go on a mission led by Kyle Reese across the Annihilation Line deep into Skynet territory to strike a crucial blow against the Machines. In this DLC, you have access to weapons from the main campaign story as well as weapons that were previously exclusive to Infiltrator Mode. The DLC will take place mid-way during the main campaign, after Jacob and co. destroyed the T-850 sent after Jacob.

On August 29, 1997, Skynet, the military computer artificial intelligence defense network, became self-aware and created a nuclear holocaust, called Judgment Day. In the following decades, Skynet was locked in a war to exterminate humanity. Pockets of human survivors were organized into Resistance military cells dedicated to strike back against Skynet, led by John Connor.

In 2028, Jacob Rivers was targeted for termination by a T-850 Infiltrator, who led a strike force to attack Rivers' unit, Resistance Pacific Division. River then became the sole survivor of his unit while deployed in Pasadena. When evading Skynet patrols, Jacob made an alliance with a pocket of human civilian survivors, including Jennifer, her surrogate brother Patrick, an elderly man named Ryan, scavenger Colin, and hospital nurse Erin. While gathering supplies for the survivors, Jacob met up with a Tech-Com unit led by Commander Jessica Baron and learned that she was forced to abandon his unit during the attack on Pasadena in order to minimize further Resistance casualties. Recruited into Baron's unit, Jacob was tasked with carrying out reconnaissance missions in order to cripple Skynet. While carrying out his mission, Rivers was pursued by the Infiltrator, however, he received unexpected aid from an unidentified stranger. Convinced of the threat of the Terminator that targeted him, Baron provided shelter to the human civilians in Jacob's care. After suffering a sabotage in the Resistance defense systems, Rivers finally disabled the T-850.

With the Infiltrators now a threat, John Connor tasks Jacob with seeking out scientist Dr. Edwin Mack in order to enlist his aid for fighting against Skynet. Upon meeting Mack, Jacob learned that Mack had developed the means to hack into Skynet's network and reprogram their forces into fighting for the Resistance. Skynet had been learning at a geometric rate and creating Time Displacement Equipment in order to wipe out the Resistance. Mack provided Jacob the means to seek out the location of Skynet Central Core and requested Rivers to obtain a Terminator CPU in order to help reprogram Terminators for the Resistance. As he was carrying out the task, Jacob met up with the Stranger and was warned of an impending attack by Skynet. At this point, the fate of Jacob's allies become determinant on how much trust he has built up with them and whether or not he convinces them to leave the Resistance shelter; while also having to choose between warning Mack or assassinating him on Baron's orders due to an incident that left her lover killed by a Terminator.

Jacob led an ill-fated raid on the Griffith Observatory where the Skynet Core was believed to be located. However, Jacob became the sole survivor again as the Stranger died protecting him. To make matters worse, Skynet assaulted the main Resistance Shelter, annihilating Baron's unit in the process. Left with no other choice and knowing the true coordinate of the Skynet Core, located by the Stranger, Jacob brought his findings to John. While meeting with John, Jacob learned that the Stranger was his future self from an previous timeline and had helped play a key role in assaulting Skynet with John. Jacob and John led a main assault force on Skynet's Time Displacement Equipment, while another Resistance unit destroyed the Core. Despite the Resistance being victorious, Skynet succeeded in sending three Terminators to the past before its defeat: the first one to kill Sarah Connor in 1984, the second one to kill John as a child in mid-90s, and the third Terminator tasked to kill Jacob when he was stationed at Pasadena.

After the destruction of Skynet, Jacob had to make the decision to either travel back in time to protect his younger self, or stay in the present and have another Resistance soldier take his place as the protector instead.

The epilogue is an animated sequence that shows the fates of Jacob and his allies, and the outcomes of the choices players made during the game.

The Resistance has utilized many weapons, including plasma weaponry, against Skynet and it's army of Terminators. 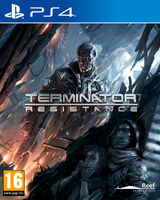 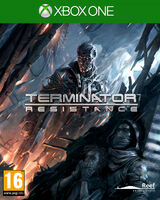 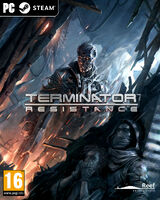 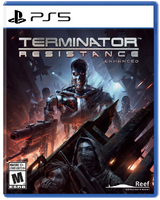 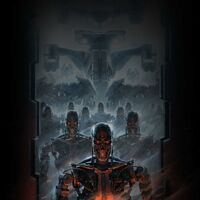