Back to page
Add topic

Subjects that are open for opinions are marked with ↔ in the main article.

Why was the formula on the wall covered?[]

Hey, turns out the gallery I tried to post last week didn't work because I forgot to post the pictures, duh. Here's all the promo pictures that I found for this episode. Feel free to use 'em for various pages on the site.

If folks are interested, I'm getting these from Comics Continuum, an online comics store that posts daily news updates on comics and sci-fi-type shows. They often have promo pics from new TV shows, so it's a good source for pictures if you're looking to spruce up a sci-fi TV wiki. -- Danny (talk) 05:41, 24 January 2008 (UTC) 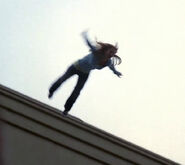 The metal detector thing was mentioned one of the novels (T2: Infiltrator?), making this only the first live-action depiction of it. --Dragonclaws(talk) 19:08, 5 February 2008 (UTC)

Ah interesting! I didn't know that about the novel. Also - by emphasizing live action, do you mean that the word "cinematic" isn't quite right (since the SCC are on TV)? If so, I agree! But not sure what word best captures the concepts of TV and Film... --Kanamekun 20:26, 5 February 2008 (UTC)

Yeah, "cinematic" is not quite suitable, which is why I switched to "live-action" in here, but I was emphasizing it to separate it from the "first depiction" sentiment of the previous statement. It's been a while since I've read any of the novels, so I'm not sure which one it is. I remember a terminator trying to get past security giving a doctor's note about metal implants. --Dragonclaws(talk) 02:33, 6 February 2008 (UTC)

Yup, in T2: Infiltrator, the terminator Third had to deal with airport security two times. The simple metal detector booth and wand were able to be decieved by the note, but a later encounter with a higher security Fictional combination of CATscan Imaging and Backscatter X-ray technology, that resembled the scan tunnel in movies like The Running man, or True Lies revealed the endo in all its glory, alerting the human security.Fulongamer 00:31, 20 September 2008 (UTC)

I don't know if the terminators are too concerned about preserving the timeline! They often kill random people while on their missions, with little concern for how that might impact the future. Often their primary mission objective takes precedence over everything. If Cromartie's primary mission is to kill John Connor, then erasing the formula was probably tied to that goal. I can't think of a good reason connected to that though! --Kanamekun 06:08, 11 February 2008 (UTC)

They probably don't want to do something that could potentially work for the enemy's advantage. Maybe the humans having the skin graft tech would cause them to heal a great number of people, something that would register in their minds as a serious potential threat as opposed to just killing some more humans. --Dragonclaws(talk) 08:23, 15 February 2008 (UTC)

The reason of avoiding humans to discover the formula don't seem very likely. There are nothing that support this theory. As for now it can be any reason, and its just speculation. I don't say it couldn't be, but as long as the tv-series don't explain it, I remove the answer and leave the question open. Also, the Q&A is not a discussion forum, but only to have obvious answers or answers explained in a later episode. Ascaaear 18:56, 26 February 2008 (UTC)

I just feel that the Q&A section is not a discussion forum. I just came up with a cool idea. I will try it out on this article. Maybe we can use it on the rest of the wiki too. Sometimes there are things in article were there is different opinions, so what if we make a special section on the top of the "discussion" page, where we can write about the different opinions from the main article. Then we can link from the main article to the discussion page to have a more deeply opinions of that subject. What do you think of that? Ascaaear 04:49, 29 February 2008 (UTC)

I've always liked that aspect of the Lostpedia, having a page dedicated to theories from each episode. I think we should use the Talk like that. - doubleofive 12:27, 29 February 2008 (UTC)

Ah I didn't see the discussion was in two places. Sure we could create a "Theories" namespace, like here: Heroes Wiki Theories Namespace. I don't know how to do this or who has the privileges to do that, but it could be worth trying out. --Kanamekun 14:51, 29 February 2008 (UTC)

Ah maybe that would work just as well! One thought though: the word "Opinion" is pretty broad. I could post that "Cameron is a bad ballerina" and call it my opinion. That's what I like about the Theories one... it specifically focuses on fan theories. --Kanamekun 16:41, 1 March 2008 (UTC)