Terminator Wiki
Register
Don't have an account?
Sign In
Advertisement
in: Citations needed, Agents of Skynet, Assassins,
and 9 more
English

T-X (Rise of the Machines)

Edit
watch 02:56
Doctor Strange in The Multiverse o Madness - The Loop
Do you like this video?
Play Sound
The name or term "T-X" refers to more than one character or idea. For a list of other meanings, see T-X (disambiguation).

The T-X Terminatrix, one of Skynet's most advanced Terminator units, was sent back in time to July 24, 2004. Her primary mission was to terminate John Connor. Since he lived off the grid, the Terminatrix focused instead on terminating Connor's future officers of the Resistance.[1]

In 2031, the T-X was battle-tested by Skynet against several other Terminators and by Skynet itself. The T-1002 engaged the Terminatrix in hand to hand combat in the Skynet Central Core, using its mimetic polyalloy components to develop stabbing weapons all across its body. The T-X was able to gain the advantage through a combination attack utilizing her internal buzz saw to remove the spikes and later destroyed T-1002 with a direct impact from her plasma cannon. The T-X proceeded to enter the Continuum Transporter for its mission in 2004. Terminator 3: Eyes of the Rise, Part 1

The Terminatrix arrived in a time bubble on July 24, 2004, in a clothes shop with mannequins, melting them and a glass frame on arrival. It then walked out of the shop, approaching a confused woman, admiring her car before killing her and taking her belongings. The Terminatrix then went on to killing any of John Connor's future lieutenants, including Kate Brewster and her father Robert Brewster. However, when she coincidentally found Connor, who had been formerly untraceable due to "living off the grid", she made him her priority target.

After the T-X's pursuit of Connor and Brewster was intercepted by a T-850 unit sent back to protect them, the T-X changed tactics, killing and impersonating Kate's fiancé Scott Mason so that it would be taken to her when the police found her location. She intercepted Kate, John and the T-850 at a graveyard, but the trio had managed to access a weapons cache created by Sarah Connor after her death, with the T-850 using a RPG to critically damage the T-X's primary plasma cannon and possibly some of its other systems. This forced it to field-repair the weapon and it selected the IAD-ChemTech, a flamethrower. With its primary target now likely untraceable, the T-X shifted its focus to ensuring the creation of Skynet by eliminating Robert Brewster, the man in charge of the Skynet program.

At the Cyber Research Systems facility, the Terminatrix obtained an Air force uniform and reprogrammed the T-1s by using injected nanobots to have them protect Skynet the moment it took control of the entire U.S. defense grid. It then killed Robert before going after John and Kate, simultaneously infecting the T-850 with nanobots so that it would itself attempt to kill John and Kate. John and Kate managed to trap her in a particle accelerator and help the T-850 reboot itself before going to Crystal Peak, where they were told Skynet's central core was located. Although it was almost incapacitated, the Terminatrix broke free of the accelerator using a diamond-tipped buzzsaw and followed them, losing most of her polyalloy skin and half of her lower body in the process. She crawled and grabbed John, determined to complete her mission, but the returned T-850 destroyed them both by sticking its remaining hydrogen fuel cell in her mouth and triggering its destruction, with a remark of "you are terminated." Terminator 3: Rise of the Machines

The T-X appears to possess a very limited emotional range (as all Terminators do), which it exhibits even when it is alone, as opposed to displaying emotion to ingratiate itself with humans. Such behavior can be seen during the crane chase when it exhibits frustration and also performs a surprised double-take upon realizing the T-850 is still in pursuit. The T-X appears to exhibit a fear response just before the T-850 finally terminates it with one of his hydrogen cores and manages to reform part of its human face with its remaining mimetic polyalloy to make a horrified face while trying to escape. Also, early in the film when it identifies blood as belonging to "primary target" John Connor, the T-X appears to react with an expression akin to a gasp of excitement. She also shows satisfaction as she smiles once she defeats the T-850 in the bathroom battle and when she thinks she beat him in the road battle.

The T-X is also the only machine to make feral growling noises when angered or frustrated.

The unfortunate woman happened upon the T-X's displacement. The T-X possibly (not explicitly shown) broke her neck while mimicking her clothes, stealing her car afterward.

He pulled over the Terminatrix while she was driving recklessly in a Lexus. He was apparently killed and his service pistol taken by the T-X.

He was unaware that the T-X was trying to kill him, instead assumed that she was a customer for fast food. He was shot multiple times.

He was unaware that the T-X came to his house and thought it was his mom. William was pushed down to the floor and was shot multiple times.

She was waiting in the vet lobby busy worrying about her cat before getting gunned down by the T-X to see if she was Kate Brewster, and eventually died by her wounds.

Scott thought that the T-X was Kate Brewster due to her ability of impersonation. He was presumably killed with a buzz-saw and is impersonated by the T-X later.

He was unaware that the T-X impersonated Scott before being punched through the chest while driving.

Detective Edwards's partner, he was incapacitated or killed with a blow to the head after witnessing Edwards's death.

While infiltrating the CRS the T-X briefly replaces the clothing of its default female form with the more appropriate Air Force uniform ("Female Blues" type), complete with 1st LT shoulder rank insignia and the nametag "Hastings". Although there is no evidence that Hastings existed in the first place, T-X's and T-1000's modus operandi for acquiring identities of officials included eliminating said officials even if the unit applied the uniform to their default form.

He was caught by surprise by the Infiltrator disguised as Katherine Brewster. He was shot multiple times but was carried away and survived until a Skynet HK-Drone fired a missile into his office.

This article is in need of images From mechandise. You can help Terminator Wiki by adding some. 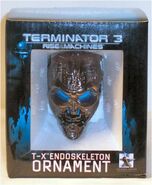