The T-Infinity is built with an onboard time displacement equipment, making it possible to relocate itself in time. It is able to trans-locate direct hits from a weapon and not be destroyed. However, it can trans-locate only attacks that it is aware of, therefore making him susceptible to stealth attacks, also an indirect hit does weaken it. [1] In addition, it is vulnerable to close-quarter combat and energy weapons, such as EMP attack.

Still, the T-Infinity is not completely invulnerable, as shown when John Connor seriously damaged it by blowing up one of his arms and deactivating his defensive force field by attacking him with a rocket launcher while it wasn't looking.[2]

A technology similar to the Series X endoskeleton has been applied in the T-Infinity, making it capable of storing various onboard weaponry inside his forearms, which appear to be made of liquid metal that rearranges itself in various weapons that incude, plasma cannons, energy-based machine guns, blades and a configurable energy blade capable of effortlessly cutting a T-800 and a T-X in half. Despite his advanced technology his onboard weapons share the same vulnerability of those of a T-X, meaning that shooting inside the mouth of his weapon will cause it to detonate and consequently blow up his forearm, still, he can recover from the damage and reform his forearm in mere seconds.

The T-Infinity is an extremely capable and lethal fighter, easily able to overpower and destroy Uncle Bob and a T-X in two separate occasions.

At a distance he employs various weapons stored in its forearms, unlike the T-X it displays the ability to generate multiple firearms at the same time, making him able to simultaneously shoot at multiple targets while defending himself with his force-field and trans-location abilities, in close quarter fights he employs his massive size and strength in combination with his energy blade to quickly dispatch his opponents.

The T-Infinity can see enemies hiding behind solid objects by sensing their heat signatures, also thanks to its time displacement equipment it can see through time in the immediate past.

The T-Infinity is extremely resistant to damage and can keep fighting on and on, it was observed destroyng eight T-800 without taking much damage and later continuing to fight even after it was heavily damaged and had one of its arms completely destroyed in an explosion.[3]

Despite his great resistance to harm its still possible to damage and destroy a T-Infinity, since his trans-location abilities work only on attacks that it is aware of it cannot defend himself to stealth and indirect attacks.

EMP are able to temporary weaken its force-field, John Connor managed to impale the T-Infinity while weakened and triggered an accidental time jump, which caused the T-Infinity to confuse friends with enemies.

A direct hit from a rocket launcher was able to blow up on of arms and the subsequent attack from the Dire Wolf sealed the fate of the T-Infinity, whose head was ripped off by the canine Terminator.

His CPU and Time Displacement Equipment are also vulnerable to reprogramming once it is shutdown.

Skynet somehow found out the timeline is unbalanced when Uncle Bob appears and decides to correct it by using a T-Infinity. The T-Infinity is sent back to July 17, 2009 just before John Connor becomes the leader of the Resistance.

Skynet dispatch the T-Infinity again from 2033 to 2015 in order to kill Tara Connor. During a raid in the Resistance Headquarters, the T-Infinity is temporally disabled by John Connor with EMP pulse and a steel bar, causing its onboard time displacement equipment to malfunction. Thus, both John Connor and the T-Infinity are sent back to Alabama in the year 1996. Issue #1

The T-Infinity arrives Birmingham, Alabama in 1996. The malfunction has caused a confusion within its system, thus its mission priority becomes Sarah Connor. Issue #2

The machine goes to young John Connor's school and kills the principal, waiting for Sarah Connor. It fails to terminate Sarah upon the first encounter. Issue #3Sarah runs to the street, only to face the army of the T-850. The T-Infinity follows her to the street and begins to fight the T-850s. Issue #4

After destroying the T-850s, the T-Infinity uses the chrono-imager to track down Connors to their hideout in the woods, only to be confronted by the Connors. During the battle, the machine's right arm is destroyed by John Connor with a bazooka. The machine is later destroyed by a Dire Wolf, a wolf Terminator used to destroy the T-Infinity. After destroying the Dire Wolf, John Connor uses the onboard time displacement equipment from the remains of the T-Infinity to travel back to the 2015 with Kyle Reese. Soon after the arrival, John uses T-Infinity's neural network to set a coordinate for a missile to hit the Skynet Hub in Nebraska, destroying Skynet once and for all. Issue #5 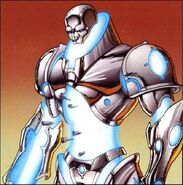 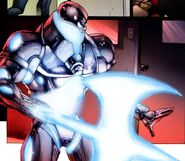 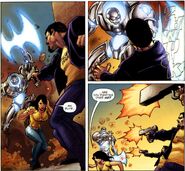 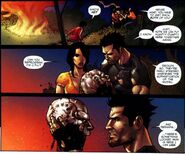