The T-900[1] is a type of Endoskeleton-based Terminator and advanced Infiltrator designed by Skynet that features a software specialized for infiltration that makes it believe itself is human.

Like a T-888, the endoskeleton of a T-900 is made of a hyperalloy with the key ingredient coltan,[2][1] more advanced than the T-600 titanium alloy endoskeletons. A T-900's endoskeleton is similar to the T-888's, albeit much smaller. Its skull is apparently identical to the design of the T-888, such as the teeth, jaw, and brow.[3][4] Hence, the T-900 has a certain level of compatibility with the T-888, as parts from other Terminator endoskeletons can be used to repair its own.[5]

Its Head-up display is full color, unlike other Terminators whose HUDs are usually either in red or blue for energy saving.

Similar to T-888, a T-900 also features the "120 second reboot" factor.[7] However, excessive damage can force a longer period of offline time as self-diagnostics, automatic repair and rerouting subroutines work to reactivate the unit.[8][9]

Though not designed for combat against other Terminators unless necessary,[5] a T-900 is able to battle a T-888 Terminator, and has even defeated the T-888.[3] This is not to say, however, that the T-900 is the decisively superior combat model, as it has been overpowered by the T-888 on other occasions.[2][8]

Because of the unique design, a T-900 can be input with the memory of its human replacement for the purpose of "Sleeper infiltration". In some case, a T-900 may even believe itself is a human[10], which is similar to the TS-300 from Hunters and Killers timeline. (When in this state, the HUD will be switched off.) Hence, the T-900 is capable of genuine emotion in this state, making it able to show infiltration skills that easily surpasses those of the T-888, an advanced model infiltrator. For example, T-900 Cameron displays the ability to pose as a curious and friendly student, without any tell-tale irregularities that are common among other models. It is feasible that John may never have learned the truth about her had Cromartie not intervened.[11]

If mission requires, a T-900 can lie like a T-850 does. Further more, since a T-900 features unsurpassed human mimicry, making it able to fake emotion, such as crying, to cheat enemy/target in order to achieve mission or avoid being terminated.[12][10] Note the tear ducts are necessary for eye lubrication and protection, so it is logical to assume all living-tissue-covered Infiltrators features them, otherwise their eye tissues would quickly degrade to the point where it would be obvious they are not human. Of course, that does not imply they are all programmed with the ability to cry as the T-800 told John Connor, "I know now why you cry, but it is something I can never do.",[13] which strongly suggests that earlier models do not have the necessary connections and/or software for their emotions (or their equivalent) to trigger crying.

These unique features on Infiltration function of T-900 would suggest that a contributing factor in her success is due to Skynet's allowance for emotions in her core programming.

A T-900 is capable of feeling her environment to the same degree as humans, with the exception of pain.[14] For example, in "To the Lighthouse", Cameron was doused in water and was visibly surprised and shaken by the rapid change in temperature, suggesting she was uncomfortable with getting wet. In "Complications", Cameron put a foot out the car window while John drives. When John asked why, she replied she wanted to feel free, and the wind running through her toes. She informs John that she feels much more than he thinks, which is probably because John's sole reference point for a Terminator's senses was a T-800 series, and she would be worth quite less if she couldn't. In "Born to Run", Cameron seemed to display discomfort when John cut into her chest, and then a moment later she demonstrated a possible pleasurable response when John examined her power source.

A T-900 features the ability to check vital signs by touch, measuring a person's stress level and medical condition.[Episode needed]

A T-900 can be knocked offline by overcurrent.[7][12][17] In addition, extremely strong external force may be another factor to temporarily shut down a T-900.[8]

Though a T-900 is able to sustain and survive the explosion when sitting inside a car attached with a bomb, the impact from the explosion can cause glitch in its CPU[12][10] in addition to mechanical glitches.[5] Glitches within CPU can result in reaction lag or even a factory default setting. However, the reset can be compromised via overwriting by the T-900 itself.[12] 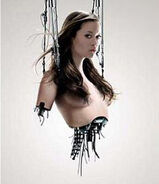 Sleeper agent mode
Add a photo to this gallery

Cameron is deep-scanned
Add a photo to this gallery

Cameron
(Class TOK715, with a model based on Allison Young)
Add a photo to this gallery

Retrieved from "https://terminator.fandom.com/wiki/T-900_Infiltrator?oldid=103233"
Community content is available under CC-BY-SA unless otherwise noted.