Edit
watch 03:36
Wiki Targeted (Entertainment)
Do you like this video?
Play Sound
The term "T-850" refers to more than one character or idea. For a list of other meanings, see T-850 (disambiguation).

Terminator 3: Rise of the Machines (original body only)

Resistance
Skynet (formerly)
The Cyber Research Systems Model 101 Series 850 Infiltration-Combat Unit[1] was a Terminator sent back through the time from the future to present day by the Resistance to protect Kate Brewster and John Connor in Rise of the Machines and Kyla's World timelines.

Future War in Rise of the Machines novel[]

In 2029 of Kyla's World, after learning Skynet had developed a new type of Terminator, John Connor decided to sent a T-850 to the present day. He and Kate Connor led a team to the Cyber Research Systems main facility in the ruin of the Edwards Air Force Base. There, they activated the T-850 and programmed it before sent it to 2003 through the Continuum Transporter. Terminator 3: Rise of the Machines (novel)

Future War in Rise of the Machines video game[]

In 2032 of Rise of the Machines timeline, the T-850 was sent to terminate John Connor by Skynet. It fought its way to the Home Plate, the Resistance Headquarters, and infiltrated the facility. It entered the room where John was and killed him from behind by surprise. The T-850 was later captured and reprogrammed by General Kate Connor and her team. After it rebooted, the Home Plate was under heavy attack by Skynet force. The T-850 saved Kate Connor from a T-900 strike force led by a T-950. The T-850 was then dispatched fight its way to Skynet facility. There, it helped Kate's Tech-Com force to enter the facility before it secured the Time Displacement Chamber. Kate then operate the time machine and send the T-850 to 2004. Terminator 3: Rise of the Machines (video game)

After it was sent through the Continuum Transporter and emerged from its time bubble in Joshua Tree, California, it went to a club to acquire its clothing and then proceeded to steal a truck and got sunglasses.

It approached Connor in a veterinarian clinic where Brewster worked and took the two with him in the back of Brewster's Toyota Tundra to escape the T-X, a new, highly advanced Terminator. While driving, John asked him about its memories, assuming that this would have the same memories as "Uncle Bob". It stated that the Terminator sent from last time was a different T-101 (Model 101) unit. He then notified John that a T-X was sent back through time to eliminate his lieutenants as well as that his efforts in destruction of the Cyberdyne Building did not stop Judgment Day, but merely postponed it. The T-850 also told John that the T-X was designed to be capable of defeating other Terminators.

At a cemetery, the three went to Sarah Connor's grave. The Terminator dropped her coffin to find weapons inside. When the police arrived, they escaped, only to confront the T-X again. Later at a campsite, the Terminator revealed that if the T-X failed to kill John, it would kill John's future officers as secondary targets, including Robert Brewster, Kate's father. While driving, the Terminator revealed that he follows Kate's commands rather than John's, unlike the "Uncle Bob" as it was Katherine who sent the machine from the future, not John, because the Terminator killed John in 2032 before being captured and reprogrammed by the Resistance as he was chosen by Skynet for infiltration due to John's emotional attachment because of his boyhood experiences.

In the Cyber Research Systems facility, the Terminator battled with T-1 T-1 Battlefield Robots before fighting the T-X again. However, the Terminator could not overpower the advanced Terminatrix, the fight ending in the T-850's semi-decapitation. The T-X decided to put the Terminator to utilize by using Nanotechnological Transjector to partially reprogram him and sent him off to kill John. Controlled by the T-X, the T-850 began to attack John and Kate, but shut itself down to prevent itself from killing John when he confronted it with the conflict between its current actions and its primary programmed mission to ensure John and Kate's survival.

After it rebooted and regained control of itself, the Terminator battled the T-X for the last time at Crystal Peak after taking a helicopter to follow John and Kate. Although the Terminator crashed the helicopter on the T-X, it only damaged T-X's legs and outer sheath, but the damage delayed it long enough for John and Kate to retreat into the Crystal Peak underground bunker to wait out the now-inevitable nuclear war. When the T-X attempted to follow them by crawling, the T-850 managed to detonate its last hydrogen fuel cell to destroy itself and the T-X by ramming the power cell into its opponent's mouth, resulting in a massive detonation, its last words being to inform the T-X "You are terminated". Terminator 3: Rise of the Machines

Note: It is seen during John's narrative at the end, with only its head still intact and online. As the viewer watches, its eye fades and the machine shuts down.

After terminating John Connor, it started a rampage in Home Plate before it was taken down by General Kate Connor and her team with electrical projectiles that overload its system. The T-850 was later reprogrammed by Daniel, who found out T-850 had some damages within its system and tried to fix it. Kate Connor rushed into the lab and attempted to destroyed the T-850, but she was convinced by Daniel that the machines had been reprogrammed and now worked for the Resistance.

However, after the T-850 rebooted, Skynet was aware of the T-850 being reprogrammed and sent a troop of Hunter-Killers to attacked Home Plate. The T-850 dispatched the threat before heading to Continuum Transporter. Before reaching the facility, it aided the Resistance fighting Skynet force and destroyed an FK Command.

By using the Continuum Transporter, the Terminator arrived 2003 and rescued both John Connor and Kate Brewster. After escaping from the T-X at the cemetery, the T-850 mentioned Crystal Peak as a place of refuge for the imminent Judgment Day. The group headed to the Cyber Research Systems in the Edwards Air Force Base to obtain a plane in order to fly the 50 miles there. However, while fighting through the Cyber Research Facility, the T-850 was thrown into a prototype Continuum Transporter, sending it into an alternate future where the T-X had succeeded in its mission and humanity had been terminated. However, the T-850 was able to find the time machine in that timeline and returned to the present, where it proceeded to find and rescue John and Kate.

At the Crystal Peak, the T-850 used the Hydrogen fuel cell to destroyed the T-X along with itself. However, John managed to retrieved its CPU after the explosion caused by the fuel cell. Several years later, John inserted the chip into an FK Reaper during the War. Thus, the T-850 was brought back to be fully operational again, fighting along with the Resistance, albeit in a very different body. Terminator 3: The Redemption

During 2029, there was an equivalent of the T-850 Protector in Salvation timeline, a Terminator who was activated by Thomas Parnell as he was under threat by a Terminator which was synchronizing with John Connor. The Terminator was tasked with a mission to terminate Connor and it broke into Dr. Serena Kogan's laboratory. Armed with an M-25, it destoryed two Endoskeleton assistance to Dr. Kogan, knocking out her before successfully it killed Connor. The Final Battle issue 11

After the War ended, Skynet provided information regarding on the Terminator to Marcus Wright, who lead a team and tracked it down. Marcus was then brought it to John Connor, who now lived as a Terminator Endoskeleton. Connor had it reprogrammed by Dr. Kogan who had the machine only answer to Kate Connor's voice since there was no usable voice samples from John Connor. After it was reprogrammed, John Connor sent it thought the Time Door to the past. The Final Battle issue 12

Note: The series of the T-850's equivalent in The Final Battle is never given and it is presumably a T-800.

Although physically similar to the T-800, the T-850 possesses a number of noticeable differences; The T-850's appearance is a bit more aged than the previous two T-800 units and has less sense of humor than the T-800 (Uncle Bob). It almost seems to stand up for itself when it replied that it is a "cybernetic organism", not a "robot", as John had stated. Although originally programmed to follow any and all orders from Kate, it could override this default programming and trap her in the back of her truck against her wishes. It states that one of its basic subroutines deals with human psychology, and despite its lack of humor is still able to make an emotional connection with John when he fights the T-X's reprogramming of his systems and again later when he tells John they will "meet again". 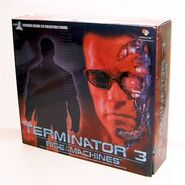 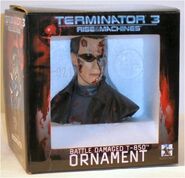 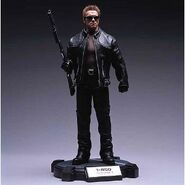 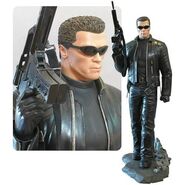 T-850 Battle-Damaged (Model Figure Series)
This article is in need of images From mechandise. You can help Terminator Wiki by adding some.