watch 01:56
The Loop (Movies)
Do you like this video?
Play Sound

The name or term "T-850" refers to more than one character or idea. For a list of other meanings, see T-850 (disambiguation).

Skynet
T-850 Infiltrator is a Series 850 Terminator sent back from the future by Skynet, just before the destruction of Skynet Core, in order to kill Jacob Rivers, who was listed the second of Skynet's kill list as he was the messenger who gave John Connor the location of Skynet Central Core. Thus, Skynet sent the T-850 back to kill him before he could pass off the information.

The Infiltrator is a Series 850 unit, created specifically to locate and kill Jacob Rivers. In addition, it immediately warned Skynet about the threat Jacob presented after it arrived from the future. Afterwards, the T-850 approached the headquarters of the Resistance's Pacific Division in Pasadena, where Rivers was stationed, before it called reinforcements and accelerated the Annihilation Line to Jacob's position.

At a certain point, the T-850 was spotted and tracked down by a Resistance soldier, Colin. However, it found out and killed Colin and waited until its target, Jacob Rivers, walked into the ambush. Before it could terminate Rivers, he was saved by a future version of Rivers.

Later, the T-850 followed Rivers to the hideout, but was again stopped by the Stranger as he cause the building to collapse on top of it. However, it not only survived, but later fooled the unaware Southern Division to drop their defense grid just as the Annihilation line continued its advance into that region.

After learning the T-850 had targeted Rivers, Jessica Baron set up an ambush plan and engaged the machine. It was not only stronger than other Terminators for the current period of time, it also brought a second-generation Skynet plasma minigun to fight against its attackers. After a long and grueling battle, the T-850 was eventually defeated and taken apart for further examination. It was through this victory that the Resistance learned of the terrifying truth about how Skynet was upping its game with machines disguised as humans.

At a certain point before its destruction, the T-850 possibly warned Skynet about its defeat in the near future, allowing the AI to relocate its central core to a safer place. Terminator: Resistance

The T-800 (The Terminator)
Add a photo to this gallery 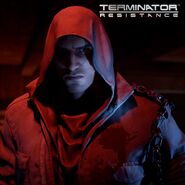 Retrieved from "https://terminator.fandom.com/wiki/T-850_(Resistance)?oldid=106539"
Community content is available under CC-BY-SA unless otherwise noted.