After its termination, the original T-800's wreckage was retrieved by Cyberdyne Systems. By studying the wreckage, Cyberdyne was able to develop the Neural Net CPU via reverse engineering, which led to the creation of Skynet. Its wreckage might also serve as the basis for the company to develop primitive Terminators, such as T-70 in Battle Across Time timeline and T-600 in Rise of the Machines timeline.

In 2029 to 1984 timeline, after the T-800 was destroyed, its wreckage was retrieved by Mr. Cort's department along with Kyle Reese. 1984 issue 1 When Sarah Connor and Ben Oliver went to rescue Kyle, they discovered the wreckage being reassembled. They wired the wreckage with dynamites, which destroyed it. However, Mr. Cort's team managed to recover the damaged endo arm and CPU chip. 1984 issue 2

In 1984, the military seized the remaining parts of the T-800. In 1992, these parts were stolen by a band of environmental scientists, motivated by the result of their scenario analysis. These scientists believed that, would this technology remain in the wrong hand, it would ultimately lead to the annihilation of mankind. These scientists later joined John Connor and the Resistance. Terminator Revenge

In Judgment Day timeline, though the original T-800 had been terminated, its right arm and crushed CPU had survived the hydraulic press, and were recovered by Cyberdyne Systems. Dr. Miles Bennett Dyson, a cybernetics scientist and a high-ranking employee of Cyberdyne, was tasked with creating a new neural-net processor from these two pieces of unknown-sourced advanced technology.

Miles studied the processors and was able to build a revolutionary new brand of automated systems, a more-advanced form of artificial intelligence and making other existing computer systems obsolete in comparison. The project eventually reached the point where he nearly completed a prototype of the processor. In the same manner as Kyle Reese's entrance into the timeline had altered the fathering of John Connor, the introduction of the Terminator's remains altered and accelerated the rise of Skynet, introducing another alternate future revolving around a predestination paradox.

The Terminator arm and CPU were stolen from Cyberdyne by a 10-year-old John Connor, his mother Sarah, and another T-800 which had been reprogrammed by the Resistance. They ultimately destroyed the two Terminator pieces by throwing them into a vat of molten steel, in an attempt to change the future and eliminate Skynet once and for all. Terminator 2: Judgment Day

After the T-800 was terminated by Kyle Reese, its CPU chip was removed while its wreckage was completely destroyed in an acid bath by Pops. Pops then used the removed CPU chip to activate the Time Displacement Device to send Kyle Reese and Sarah Connor to 2017 in order to destroy Skynet before its activation. Its CPU chip was then fried afterward. Terminator Genisys

The pieces being taken away by John Connor.
Add a photo to this gallery 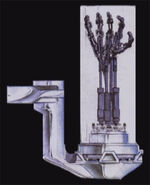 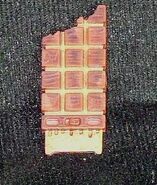 Terminator/Robocop Kill Human
Add a photo to this gallery

Add a photo to this gallery
Retrieved from "https://terminator.fandom.com/wiki/T-800_(The_Terminator)/Wreckage?oldid=106946"
Community content is available under CC-BY-SA unless otherwise noted.