The name or term "T-800" refers to more than one character or idea. For a list of other meanings, see T-800 (disambiguation).

The Prototype T-800, also known as the T-RIP (Resistance Infiltrator Prototype), was a prototype Series 800 Terminator that was manufactured in Skynet Central in 2018.

John manages to retreat to laboratory where a disoriented T-600 was firing its mini-gun aimlessly due to sabotage. The T-800 follows him and encounters the flailing T-600 whereupon it swiftly bisects the machine. John blasts it twice with his grenade launcher, burning off its flesh sheath and revealing the metallic endoskeleton beneath. John then blows a hole in the wall and escapes with Kyle and Star into the Terminator Factory below the laboratories. 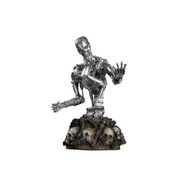 Retrieved from "https://terminator.fandom.com/wiki/T-800_(Terminator_Salvation)?oldid=93055"
Community content is available under CC-BY-SA unless otherwise noted.