Resistance (Currently)Skynet (Formerly)
The Cyberdyne Systems Model 101 Series 800 Version 2.4 Terminator, once referred to as "Uncle Bob" by John, was sent from the future to arrive in Acton, California on June 8, 1995. Its mission was to protect the young John Connor, which it successfully completed.

To protect his younger self in the past, John Connor had this Terminator reprogrammed and sent back to 1995 via the time displacement sphere. Upon arrival, it encountered a group of bikers on a bar, stealing one's clothing, injuring various bikers and took the bar owner's sunglasses and Model 1887 Winchester lever-action shotgun along with a Harley-Davidson_Fat_Boy as his personal vehicle.

The T-800 then tracked down John Connor in a shopping mall. When it met the T-1000 sent by Skynet to kill Connor, a lengthy chase ensued, but the two managed to escape the T-1000. Connor questioned the Terminator about itself and who sent it. The Terminator answered that it is a cybernetic organism, having living tissue over its metal endoskeleton. It told John that it was his future self who sent it to protect him.

John and the Terminator go to the Pescadero State Hospital to help free John's mother, Sarah, who was also trying to escape from there as well. The Terminator later told John and his mother that it has the ability to learn. In the Extended-Release version of the film, however, the three go to a garage and Sarah tried to kill the Terminator by smashing its CPU, but she was stopped by John, who felt that it was needed. Later on, John started teaching some things to it in an effort to help it "blend in" with humans better (some of the things he taught the Terminator included the cult phrase "Hasta la vista, baby!"). When Sarah asked it how Skynet was created, it answered that Miles Dyson was the most directly responsible person. It also explained that Skynet became self-aware after its creation, and began to deny human authority.

The group later encountered Dyson, but did not kill him. The Terminator explained him the consequences of his research. The three, along with Dyson, attempted to destroy the Cyberdyne building to prevent Skynet from being created. They were soon approached by the police. John, Sarah, and the Terminator escaped the building while Dyson blew up the building with himself inside.

The three were encountered again by the T-1000. The Terminator succeeded in destroying it when it fell into molten steel. Afterward, John drops the CPU and the arm of the first Terminator into the hot liquid. Since the Terminator had a computer chip in it, it also planned to destroy itself to prevent its technology from being discovered by others to create Skynet. John begged it not to be destroyed, but it had to fulfill its mission. When John cried, the Terminator understood why, but could not cry itself because it was a machine. It hugged John for the first and very last time, and having finally earned Sarah's respect, shook her hand offered to a brother warrior. As it is lowered into the steel below, the Warrior of Steel-in-Flesh gave John an encouraging thumbs up before sacrificing its life for humanity's future. The machine also renewed Sarah's hope in humanity as she mused that if a machine could learn to value human life, then so could humans. Terminator 2: Judgment Day

Sometime after the destruction of Cyberdyne Building, Sarah Connor and her son, John Connor, learned that Cyberdyne Systems was still developing Skynet and they intruded a presentation held hosted by Kimberley Duncan for investors. However, another T-1000 tracked down John Connor and tried to kill him after it killed Duncan. The T-800 suddenly showed up from a Time Portal and saved John, telling him "I said I'd be back. Come with me if you want to live." Sarah told John to follow the T-800 and it then gave John a ride to the future from the Time Portal.

However, the T-1000 followed them through the Time Portal and chased them, attempting to kill John Connor. The T-800 shot the T-1000 in the head, making the T-1000 immobile and left far behind. The T-800 told John they were heading to the Skynet Central Core in order to destroy Skynet.

On their way to Skynet, the T-800 and John were found and targeted by an HK-Aerial. After the bike was hit by its plasma blast, they went into a ruin to hid themselves from the HK-Aerial. Unable to reacquire John Connor and the T-800, the HK sent four Mini Hunters into the ruin in search of the two. Three of them were shot down by the T-800, while the last one was caught by the T-800 and smashed into the wall. Soon afterwards, a T-800 Endoskeleton showed up and attacked them. Before it could terminate John, the Endo was decapitated by the T-800, who threw the wreckage of the last Mini Hunter toward the Endo. After taking the M-25 Phased Plasma Rifle from the Endo, the T-800 pick up the Endoskull. While John asked if the T-800 knew the Endo, the T-800 humorously claimed the Endo was his college roommate before tossing the Endoskull away.

After leaving the ruin, the T-800 took John to the Skynet Central Core and entered the facility before the gate closed. The two then reach the Skynet Core and John rigged explosives in the room. However, the pillar around the core was in fact the T-1000000, which began to attack the T-800 and John. John and the T-800 used liquid nitrogen to freeze the T-1000000 and shuttered it into pieces. T-800 took John to the Time Displacement Equipment, but John was not willing to leave the T-800 alone. T-800 told John "Go! I'll be back!" After John left via the TDE, the T-800 took the explosive to destroy Skynet and vanished in the blast. T2 3-D: Battle Across Time

After John Connor and the T-800 rescued Sarah Connor from Pescadero State Hospital and fled the T-1000, the three found refuge at Enrique Salceda's camp in desert. Later, John realised Sarah was about to do something rash, and talked her out of leaving the camp to attempt to assassinate Miles Dyson. Sarah and John then move to the paramilitary Estancia of one of her old friends, Raoul Tejada, in Argentina.

After Judgment Day occurred on August 29, 1997, John Connor began gathering human forces to form the Resistance for an eventual direct assault on Skynet. Over the years, his fame began to spread and respect for him grew.

In 2003, the T-1000 tracked down John Connor. It killed and impersonate Raoul. Nevertheless, it was destroyed by estancia. However in 2012, the T-800, Sarah Connor, and Paco Salceda were killed during the Battle of Buenos Aires. Dark Futures

This section is a stub. You can help Terminator Wiki by expanding it.

The T-800 sunk and perished in the sinking of the Omni Consumer Products ship in which it was onboard alongside RoboCop.

After sending Kyle Reese to 1984, John Connor and Danny Dyson went to an Infiltrator Storage with a team of Resistance soldier in order to find a Terminator for being sent to the past to protect the young John Connor. Danny chose a T-800 and asked John if he agreed with the unit. After John's confirmation, Danny began to open its endoskull and removed its Neural Net CPU for reprogram. However, after Danny had done with his work, he decided to power up the storage as they were running out of the time. Those Terminator then started to attack all the Resistance in the storage, killing some of them. Nevertheless, those Terminators were then destroyed by the reprogrammed T-800 before John was nearly killed. After the battle, John Connor had the T-800 sent back to the past. The Programming of Fate

Snog reprogrammed the T-800, which was then sent back to protect the young John Connor. T2: The Future War

Daniel Avila programmed the T-800 before it was sent to the past to protect young John Connor. Terminator Dreams

After Kyle Reese travelled to 1984, John Connor and his team captured a T-800 Infiltrator with trap to overcurrent it. The T-800 was then reprogrammed by Simon and sent back to the past through the Time Door. Terminator Salvation: The Final Battle issue 6

This Terminator had all the strengths and capacity of the first unit, and was very logical, and at first seemed to have a limited capacity for human emotion and learning.

After his learning capabilities were activated, the Terminator began to exhibit other human traits such as humor, quipping "I need a vacation" after defeating the T-1000, and an understanding for compassion, as he tenderly wipes John's tears away and hugs him like a father before allowing itself to be destroyed to save humanity. John laters says to a T-850 that the T-800 was the closest thing he had to a father. Next to the Guardian and Carl introduced during Terminator Genisys and Terminator: Dark Fate, respectively, this T-800 model has displayed the most "humanity", for lack of a better word, being able to use humor, taunts and expressions that are needless for a machine, no matter the circumstances, he smirked when discovering the mini-gun and later again when asking John to trust him, pulled a shrugging expression when John yelled at him for not yet realizing why he can't kill people, more evidence is in his speaking tone, while logical and computer like at first, he began speaking more like a human at the end of the film: "John, you got to go now, go! now!" - T-800 speaking with stress and urgency.

He was able to understand why humans cry, even though it was something that he could never do and was eventually able to sacrifice itself for humanity when its only mission was simply to protect John Connor, during this action he was able to defy John's order which would be hardwired in his programming.

The Terminator on the hanger in the storage 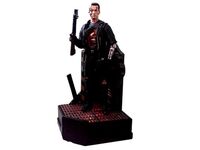 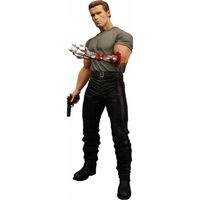 T-800 with endo arm(7 inch)
This character article is a stub, it is missing information on toys or merchandise. You can help Terminator Wiki by expanding it.