watch 01:56
The Loop (Movies)
Do you like this video?
Play Sound

The T-800 Terminator, originally developed as Terminator Resistance Infiltrator Prototype (T-RIP) from the T-700 series, is the first Terminator with living tissue outer sheath and later utilized as Infiltrator in Salvation timeline. A T-800 is powered by nuclear power cells.

In the Terminator Salvation timeline, Skynet has created T-800 Terminator in 2018, much earlier than in previous timelines, possibly based on the reversed engineer design scheme by the US Military in 2004.

The T-800 Terminator is an updated T-700 endoskeleton fitted with the synthetic skin. Different from the T-700, a T-800 does not rely on Skynet for command and control functions.[1] However, it is still able to be remotely-controlled by Skynet or a Terminator Ultra-5000 unit.[2]

The Head-up display of a T-800 unit is different from the previous timeline, as it is more advanced and high definition.

Skynet later developed several customized Terminators based on T-800 Endoskeleton, such as John Connor's "avatar" and the New Terminator.[2] 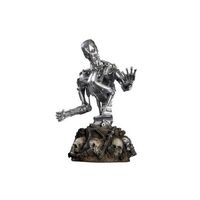 Retrieved from "https://terminator.fandom.com/wiki/T-800/Salvation?oldid=104463"
Community content is available under CC-BY-SA unless otherwise noted.