The T-7T Tetrapod, also known as "Spider" by the Resistance, is a Skynet Terminator series and quadruped Hunter-Killer used to defend key points of interest for Skynet. They resemble the HK-Centurion in some aspects, as the legs and general shape.

The Tetrapod has crab-like upper body, twin machine guns as its arms and four arthropod legs. It is often accompanied with a swarm of tiny hovering Aerostats.[1]

Though heavily armored, they are vulnerable from behind by targeting their battery packs, or from the front via their single red eye. However, shooting the red eye will only deactivate the unit for a short period of time. 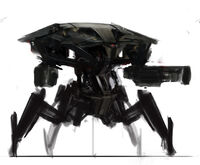 Retrieved from "https://terminator.fandom.com/wiki/T-7T?oldid=93265"
Community content is available under CC-BY-SA unless otherwise noted.