The T-700 is the first generation of the T-800 Terminator in Terminator Salvation timeline.[1][2] Powered by nuclear power cells, the T-700 is structurally identical to its Terminator cousins, but are built solely for combat as it features a more durable endoskeleton than the previous series, but its CPU is less advanced than the T-800.[1] Units of the T-700 are also entirely reliant on Skynet for command and control functions as they lack the ability for independent thought.[3]

In 2018, the T-700 Terminator was mass-produced by Skynet in at least one factory, which is beneath the Skynet Central in San Francisco.[1]

Shortly following the Mission to Skynet Central, the T-700 had become Skynet's primary battle unit having replaced the T-600 and were armed with G11 caseless-round submachine guns.[4] Like the T-600, the T-700 was capable of repairing itself. In order to complete its objectives, a T-700 could function even with severe damage to its structure. However, a T-700 could have its targeting systems disabled by piercing the back of the neck just like a T-600 as a T-700 was disabled after being shot in the neck by an arrow.[2] 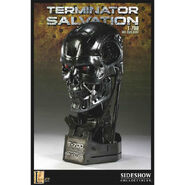