The Cyberdyne Series 70 Automated Fighting Infantry Unit "The Terminator"[1] (also known as Cyberdyne Series 70 Autonomous Infantry Unit),[2] or simply T-70,[1] was the first Terminator with a humanoid form. It is basic Terminator model designed as a basic foot soldier that stands 8 feet (2.4 m) tall.[3]The T-70 is equipped with a Gatling gun with Motion-Tracking Laser Designator, rattling off six hundred rounds a minute.[1] It can travel up to 2 km between recharges. Additionally, there were two colors available: Battleship Gray and Apache Green.[4]

During late 1990s, the new Cyberdyne Systems had developed and created T-70[2] along with T1 and use them to impress investors and people with military interests to finance them to improve robot technology.[5]

In Salvation timeline, by the year 2015, Skynet had mass-produced and deployed T-70 Terminators. Molly Kookesh met Geir Svensen when her Resistance group freed a number of prisoners from a Skynet interrogation facility in 2015. They fought a number of T-70 Terminators side-by-side in order to escape.[6] 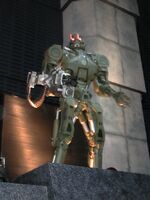 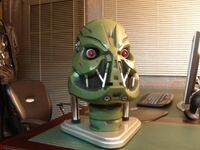 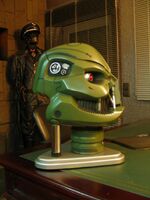 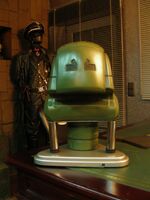 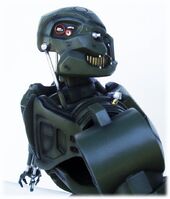 Retrieved from "https://terminator.fandom.com/wiki/T-70?oldid=106346"
Community content is available under CC-BY-SA unless otherwise noted.