The Terminator Series T-600[1] (sometimes T-600 Model[2] or 600 Series[3]) is a Terminator series mass-produced by Skynet. The T-600 Terminators are known as "Rubbers" by some Resistance soldiers[4] as they serve as early Infiltrators featuring basic combat endoskeletons made of titanium alloy, which were sometimes covered in synthetic latex.[3][1][2] As a result of their rubber skin covering, the Resistance fighters could easily spot the T-600s in the field. However, some Resistance soldiers can be fooled into thinking they were human, especially at a distance in the dark.[4]

They were mass-produced humanoid battle units manufactured by Skynet from the original designs and test models constructed by Cyberdyne Systems Corporation. Standing almost six feet tall and weighing almost 800 lbs, the T-600's endoskeleton is very powerful and can lift objects almost five times its own weight or punch through concrete and metal with no damage to its reinforced servos. The T-600 Series is capable of running at a constant speed of almost 60 km/h (37 mp/h), with short bursts of up to 75 km/h (46 mp/h). However, these bursts of speed tax the servos and the joints of the leg assemblies.[citation needed]

Essentially the Series 600 Terminator can be considered a streamlined and lightweight version of the T-500 Terminator, with improvements to its CPU and a complete redesign of the head to allow for a near human look and working jaw. This design carried over to the successors of the unit, such as T-800. This was probably because the human-like endoskeleton made it easier for the living flesh covering of later Terminators to actually look like there was actually a human skeleton beneath, unlike with previous, bulkier models which might make the covering bulge or droop in improbable places.

Due to the general fluidity of timelines when time travel becomes involved, the chronology differs between the various Terminator storylines.

For example, in the original timeline, Skynet was activated and Judgment Day occurred in 1997, where as in the Rise of the Machines timeline, Salvation timeline, and The Sarah Connor Chronicles timeline, Judgment Day was delayed due to which activation of Skynet was moved to post-2000 period (such as 2003, 2004, or 2011), albeit with a compressed rate of Terminator development. Thus, the difference between the T-600 in the original timeline, The Sarah Connor Chronicles and Salvation could be a result of the alternation of the timeline.

Additionally, in Rise of the Machines timeline, US Military and Cyber Research Systems was already building a prototype T-600, as well as developing T-800 Terminator.[5] In The Redemtion timeline, there were some prototypes completed by 2003. 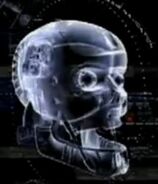 The Endoskeleton blueprint by US Military as seen in deleted scene from Terminator 3: Rise of the Machines

The Endoskeleton blueprint by US Military

The prototype axial endoskeleton of T-600 in deleted scene from Terminator 3: Rise of the Machines 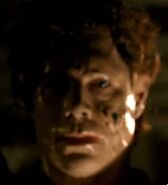 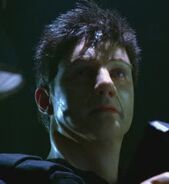 Kyle Reese: The 600 series had rubber skin. We spotted them easy, but these are new. They look human — sweat, bad breath, everything. Very hard to spot. I had to wait till he moved on you before I could zero him.
The Terminator
John: That's coltan; if that's what you're made of, no wonder you're so dense.
Cameron: Not density, heat resistance. T-600 models had a titanium alloy endoskeleton, but it was vulnerable to heat. Coltan alloys have a much higher melting point.
"Heavy Metal"