Edit
watch 02:24
Wiki Targeted (Entertainment)
Do you like this video?
Play Sound
The term "T-1000" refers to more than one character or idea. For a list of other meanings, see T-1000 (disambiguation).

The T-1000 Advanced Prototype[1] is a Terminator series produced by Skynet in 2029. The 1000 Series[2] Terminator is fully autonomous,[3] and unlike previous Infiltrator models that used rubber skin — and then finally living tissue over a metallic endoskeleton, the T-1000 is made entirely out of a liquid metal called "mimetic polyalloy", meaning it can reform into any shape it touches of the approximate size, thus calling it a "shape-changer". It cannot transform into any random object, such as a pack of cigarettes, as that size is considerably smaller. Neither can the T-1000 transform into any object that requires machinery to operate, such as a bomber plane. Another severe limitation of the T-1000 is that it cannot generate conventional weapons on its own volition, although it can utilize weaponry and vehicles found. It can, however, organically form primitive, blunt weaponry such as hooks, or stabbing weapons like knives. The usual modus operandi of the T-1000 is to impersonate civilians found or killed, only attacking once the target has been identified.

A T-1000 features a liquid molecular brain gathered by mimetic polyalloy. The molecular brain grants the T-1000 advanced reasoning capabilities, emotions such as humor, and even self-awareness.[3] As a result, a T-1000 can make its own decisions contrary to that of Skynet.[4] In order to protect itself from its own creation, Skynet did not mass produce the T-1000.[3] For this reason, Skynet later discontinued the T-1000.[3][5]

One of the fundamental prime directives of the T-1000 is "recovery of essence" as the more it loses, the less effective it becomes. The default command in the mimetic polyalloy's molecular memory is to find the main mass and rejoin it. Each molecule has a range of 14 km (8.7 mi). If a piece of mimetic polyalloy is out of range from the main body of superfluid, it can mimic something locally as camouflage (for example, a rock or a piece of pipe) until the T-1000 comes back into range again and detects it. [3]

As this trait is encoded at a very basic level, this emergency camouflage programming would manifest itself as a malfunction or glitch when a T-1000 is critically damaged. The T-1000 that fought with Sarah Connor displayed this glitch in the steel mill. Having been frozen by liquid nitrogen and shattered, the T-1000 reformed from the intense heat in the mill and began to involuntarily mimic and stick to floor coverings and other objects it came into physical contact with due to its molecules undergoing self-preservation. [3]

When necessary, the T-1000 can form additional limbs when multi-tasking, such as flying a helicopter and firing weapons.

Due to its liquid metal construction, the T-1000 is capable of extensive regeneration from being hit by bullets.

Separating the parts of a T-1000 is not enough to stop it from regenerating, as the individual pieces would seek each other out and re-form to become a complete, fully functional battle unit again over short distances. The smaller the volume of particles, the less intelligent each piece becomes.[citation needed] Combined, the T-1000 is incredibly capable; however, when in pieces, it merely tries to get back to the whole again.

The T-1000 Infiltrators, as with other mimetic polyalloy-equipped units,[6] are initially deployed with an individualized default humanoid shape, which it remains in for most of its active service. It is thought that this form was kept as it was more energy efficient than mimicking others and reduced the stress caused to its ability to molecularly expand when it mimicked larger subjects. Due to the conservation of mass, when the T-1000 mimicked a human subject of greater volume than its default form, its density decreased. It therefore compensated for illogical mass constitutions for the subject it replicated. For example, the T-1000 may have had to step down more heavily to give the appearance of a greater mass.

The T-1000's auditory sensors could be situated anywhere upon its body.[3]

The T-1000 can use its body to register its environment in many ways, can directly read magnetically-encoded information, and can run at a speed of at least 40 mph.[7]

The T-1000 is not issued with any weapons, but is capable of fashioning any solid metal form, such as knives, swords and other bladed weapons simply by extending a limb and solidifying it into the desired shape. The T-1000 cannot mimic any complex systems, which may have moving parts or chemicals, like guns or explosives. However, the T-1000 is capable of concealing and carrying weapons within itself.[8][9] In order to form a weapon from a limb, the T-1000 has to convert that particular section to a liquid metal state before reconfiguring it while keeping the rest of its body in a solid metal state. In conjunction with the flexibility given by its form, the T-1000 has demonstrated a superior repertoire of martial arts abilities programmed into its subroutines, making it more capable than the T-800 in close combat.

The T-1000 can also convert a limb into a blade and throw it like a javelin at an enemy in some situations, with sufficient force to impale a T-800 and knock it backwards at least a few dozen feet.[10]

"T-1000, liquid metal shapechanger. It just needs to touch something to mimic it."
-Sarah Connor, about the T-1000

The mimetic polyalloy construction of the T-1000 allows it to replicate any object or person of similar volume that it samples by physical contact. It appears the T-1000 can use a medium to do this without actually touching the subject's skin. Composed entirely of mimetic polyalloy, the T-1000 Terminator is a metallic mass, thus making it electrically conductive. However, unlike endoskeleton-based Terminators, the T-1000 can withstand a high-voltage charge without being knocked offline. Catherine Weaver demonstrated this ability by impaling the Water Delivery Guy with one hand and stabbing the other into a circuit breaker box, allowing the current to flow freely through her to terminate her victim.[11] Likewise, the T-1000 Terminator is unable to generate body heat and is cool to the touch just as any ordinary metal.[12] The T-1000, having the ability to be liquid or solid, can enhance its speed and its strength, especially when in its natural state.

The T-1001[13] and T-XA are able to separate parts of its body to act as independent units. In addition, a T-XA is able to control humans by injecting their nervous system with small amounts of itself. The T-1000 is able to use a small part of its body as a tracking device.[10]

The T-1000s that have been encountered in combat were notoriously difficult to destroy, even feared indestructible by some Resistance members.[citation needed] This highly-resilient battle unit was able to withstand a wide variety of temperatures ranging up to at least 300 degrees Celsius.[citation needed]

Extremely low temperatures of -196 degrees Celsius (such as those produced by liquid nitrogen) could freeze a T-1000. Shattering a frozen T-1000 will cause it to suffer from glitches as its self-preservation protocols kick in to compensate for critical damage, but will be insufficient to destroy it.

Upon contacting flame, the impersonation or camouflage can be temporarily disabled, possibly due to the intense heat.[14][15]

If the T-1000 was caught in an explosion, the unit would be liquefied for a brief amount of time.

Temperatures in excess of 1535 degrees Celsius, such as those required to smelt iron, could physically alter the bonding of the mimetic polyalloy then mix with the elements of the alloy, physically altering its molecular structure, thus permanently rendering it inoperative.

Corrosives,[16][10] such as concentrated hydrochloric acid were also known to damage T-1000s and could even destroy the units if prolonged exposure could be achieved. The Resistance also hypothesized that when it hardened its structure to make weapons or enter combat, the T-1000's molecular structure became brittle. This then made it vulnerable to a concussive shock wave.

The T-1000 battle unit T-1002 is unable to withstand a direct hit from the plasma cannon of the T-X. [17] This may be due to the advanced nature of the plasma used in the T-X's weapon, as T-1000s are capable of withstanding phased plasma attacks without permanent damage.[citation needed]

Immersive saturation attack and suppressive firepower, such as that from a machine gun, is able to keep a T-1000 from reforming [18] or even reduce it into a vet of pollyalloy pool.[19]

Owing to a T-1000's construction of liquid metal, it is relatively soft compared to an endoskeleton-based Terminator, such as a T-800 or T-X, which is composed of solid materials. Thus, the T-1000 possesses less shock-absorbing abilities to counter the momentum of a bullet, as ballistic penetration can hydro-statically traumatise the T-1000 for a few seconds. Slow, heavy but accurate rounds such as an anti-tank .50 BMG, .45 ACP, .38 special, .357 magnum, and especially close range 12 gauge blasts from a shotgun appear to be the most effective at slowing the T-1000 down; conversely light, very rapid-firing high-penetration rounds such as 5.56X45 mm from an M16 quickly pass straight through the T-1000's liquid metal body with minimum effect.[10]

In close range explosion, a T-1000's head can be blown apart. This can also happen if it gets shot by a shotgun at point-blank range. [20][21] In addition, T-1000 also has difficulty keeping its weight balance if its shape is heavily deformed, such as getting shot in the head with a shotgun, or hit by a grenade in the torso. In such cases, the T-1000 will be temporarily disabled.

The T-1000 consumes a lot of energy whenever it changes outside of its natural state.[3]

The T-1000 Terminator was constructed deep within Skynet's main complex. Within a large heavily guarded room, the mimetic polyalloy was poured into a massive machine press that fills floor to ceiling. Feeder pipes emerging from the walls and centering on the press like a hub poured the mimetic polyalloy between two 20-ton plates. These plates were then hydraulically pressed together and met, forming the indentation of a man. The mimetic polyalloy then filled this indentation and solidified, setting its default molecular structure.[3]

The T-1000 was constructed using a new technology developed by Skynet. Each molecule of the T-1000 was a primitive miniaturized version of the total machine. Every molecule had the blueprints programmed into them for all the necessary parts required for construction of the whole T-1000. [3]

Beyond the capabilities of the standard T-1000, the T-1001 could morph into a roughly slug/snake-like silver metallic form capable of moving at high speeds through air vents, performing high jumps, and swimming by propelling itself through water.[22]

Rather than automatically seeking out the primary mass, the detached parts of the T-1001 could operate independently, demonstrated by Weaver keeping a part of herself separate in the form of a pet eel.[11] This element was kept separate as a security key required for operation of the T-1001's time displacement equipment.[23]

The T-1001 was extremely adept at terminating multiple fleeing targets with deadly efficiency. It chased down a dozen employees in a secret warehouse, extending blades to at least 10ft to impale the escaping workers. The T-1001 could extend a blade and retract it again with amazing speed, suggesting a remarkable level of control over the structure of its design.[24]

At least one unit possessed more advanced interpersonal skills than other Terminator units.

The T-1002 Terminator is able to develop stabbing weapons all across its body, even transform into a weapon of its body size, which shows that it has greater control over the structure of its design then its predecessor.[17] 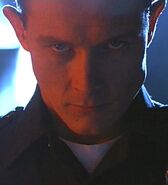 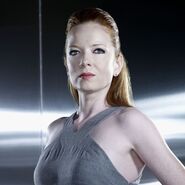 Casse
Hour of the Wolf

This article is a stub, it is missing information on toys or merchandise. You can help Terminator Wiki by expanding it.