watch 03:27
Wiki Targeted (Entertainment)
Do you like this video?
Play Sound

The name or term "T-1" should not be confused with T1.

The T-1 Battlefield Robot[1], also known as T-1 Ground Assault Vehicle[2], is a fully autonomous Ground Offensive System[1] and the first Terminator class robot and a Hunter-Killer Tank prototype developed produced by Cyber Research Systems, possibly based on patents obtained from Cyberdyne Systems.[1] Designed for extreme combat, the Series 1 was built to clear battlefields of enemy troops with its powerful weaponry.

Cyber Research Systems could not perfect bipedal walking military robots and therefore the earlier Terminator series were fitted with tank-like treads. The T-1 Proto Type unique tracked multiple wheels give the T-1 superior grip and maneuverability over loose rubble and uneven terrain combined with the speed that a wheeled vehicle brings. This makes them very versatile, and excellent for deployment into nearly any form of environment. As can be seen below, the track arrangement, which is similar in fashion to that of early 21st Century snowmobiles, makes for a very stable and secure base. Unfortunately for Cyber Research Systems, the exposed hydraulic systems and motors visible just above the tracked wheels made the T-1 Series vulnerable to precision attacks from the sides. Though it was the first Terminator class robot to be developed by CRS, the Series 1 underwent several prototype stages.[citation needed]

During the Future War in Rise of the Machines timeline, there are known two variations: T-1-5 and T-1-7 Warrior Robots deployed by Skynet.[4] Additionally, FK Tank Light and FK Hunter share similar design concept with T-1.

Compere to T-1 Prototype, T-1 Terminators in Salvation timeline included a more basic torso shape and the head unit has been lowered down, simplified and armored to dispel sensor weakness. The sensors themselves have all been combined into two "eyes" which were structured at the side of the "head" unit. T-1 seemed to be more heavily armored, showing less exposed wiring. The tank treads had been fitted with track guards to ward off enemy fire, however, the rear track for stability has no such coverings. These units lacked the numbering systems on the torso as they are mass-produced.

Additionally, the design concept of the HK-Tank is apparently an evolution of the T-1.

Mounted on a platform capable of rotating 360 degrees, the Series 1 has a wide field of attack, with various optical sensors[citation needed] and a laser beam targeting system mounted inside a "head" unit.[4] Using a primitive (by today's advanced standards) targeting system, the Series 1 is capable of identifying and eliminating multiple targets, using auditory, heat and motion sensors. This basic sensor package does however mean that the Series 1 has several weaknesses. If a human target keeps still and quiet, and masks their heat signature by positioning themselves in front of a hot object, such as a small fire, they will not be detected.[citation needed]

The Series 1 is constructed with a reinforced structure to provide great strength and durability even then,[citation needed] it can be penetrated by heavy artillery. However, all of its internal mechanics are not covered by this structure and are thus vulnerable to attack. In particular, the T-1's head and neck assembly is relatively weak and exposed, as are its extended arms and exposed wiring. Usually deployed in a crouched, compact position, the T-1 will rise up, deploying its weapons, until it stands approximately eight feet tall — an imposing sight on the battlefield.

Unlike the later Infiltrator-type Terminators, the T-1 was not designed to pass for anything resembling a human, and so was designed to be able to deliver maximum firepower in the shortest time, literally cutting down swathes of enemy troops. With its rapid, heavy firepower and fast maneuverability, the Series 1 is still very dangerous. Though an antiquated model, the T-1 is still deployed by Skynet during the Future War in Salvation timeline in order to guard complexes which have wide, exposed approaches, and to patrol open grounds.

On Judgment Day, July 24, 2004, Series 1s were activated and reprogrammed by the T-X with Nanotechnological Transjector on the Cyber Research Systems complex in Edwards Air Force Base. They killed every human in sight. Terminator 3: Rise of the Machines

After the Judgement day, T-1 were deployed to defend a newly built Terminator Factory in Russia, where they slaughtered any intruder, including part of the crew of the Gorshkov crew members. It was implied than the T-1 were employed by Skynet worldwide, as by then they were his only know ground unit. Terminator Salvation: Cold War

T-1 Terminators were still in service by the year 2018.

They are mainly used to guard important facilities and prisoners, such as Skynet VLA and Skynet Central, they have not been seen in the field. Some units did have mud encrusted on their shells though, suggesting they might be still used in the field in a limited fashion.

During the Attack on Skynet VLA, a T-1 popped out of the water in the Skynet VLA in an attempt to trap Resistance fighters, but it was soon destroyed by John Connor and his Tech-Com teammate. Terminator Salvation [5] 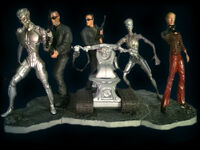 Concept arts & Behind the Scene 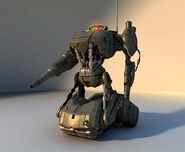 A first generation T-1 unit as seen in Terminator 3: Rise of the Machines. 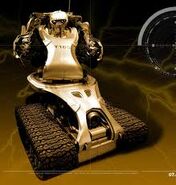 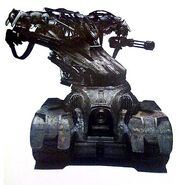 A T-1 stalks John Connor inside a Skynet R&D facility.

Retrieved from "https://terminator.fandom.com/wiki/T-1?oldid=106131"
Community content is available under CC-BY-SA unless otherwise noted.