Edit
watch 02:07
Spider-Man: No Way Home Trailer Dropped - The Loop
Do you like this video?
Play Sound

Among her many works, Summer Glau's previous television roles include River Tam on the television series Firefly (2002-2003) and the follow-up movie Serenity, Crystal Burns on The Unit (2006–2007), and Tess Doerner on The 4400 (2005–2007). After much speculation following the cancellation of Terminator: The Sarah Connor Chronicles, Summer Glau was announced as a cast member for two episodes of the Fox television series Dollhouse, but stayed on as a major character till the end of the show(2010,) she played Bennett Halverson the chief programmer for the Washington, D.C. Dollhouse. Summer Glau also featured as Isabel Rochev in CW's Arrow second season, and as Orwell(a crime blogger) in the Cape(a superhero TV show). She stars on a new show called Sequestered, being broadcast online via Cracked.com (2014) as the character of Anna Brandt, a juror. After a minor role in the show Castle (2016), Summer took a hiatus from acting to take care of her two daughters and spend time with her family. Her newest role in the show Wu Assassins, will be broadcast on Netflix in 2019. She will star as a minor character named Miss Jones. 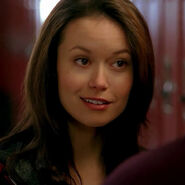 Summer Glau in the Pilot