Edit
watch 02:07
Spider-Man: No Way Home Trailer Dropped - The Loop
Do you like this video?
Play Sound

Star is a mute child who survived Judgment Day. She has been living and operating in partnership with Kyle Reese, who found her beneath the stars — hence her name — in order to survive. To aid in their survival, the two have developed a form of sign language.

Star, along with Kyle Reese, was instrumental in saving Marcus Wright from a Series 600 Infiltrator, who Marcus had mistaken for a person in the ruins of Los Angeles. By sensing the minute vibrations in the ground and in the air, she could tell when the machines were around even before they could be seen. This came in handy twice for the trio. First when they are attacked by an Aerostat at Griffith Observatory and later when her instincts would warn them of a Harvester preparing to attack their hideout.

After escaping from the remains of a store, Star, Kyle, and Virginia, the leader of the refugees in the store, were captured by the machines and taken to Skynet Central by a Transport for processing. Star was comforted by Virginia's singing and stories while Kyle searched for weapons and Star's missing hat, which was very important to the young girl. Soon after arrival, Kyle was taken away from the two and Star were separated from Virginia.

Star would be one of the first people to encounter a T-RIP, the prototype T-800, which was sent to kill John Connor. As the machines tried to kill Connor, her quick thinking allowed her to find the detonator switch when Connor lost it. She was rescued soon after. 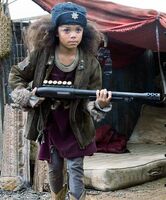