The Spider Tank is one of Skynet's Non-Humanoid Hunter Killers as a principal ground-based combat robot utilized as Skynet Assault Battle unit.

Spider Tanks are roughly two-and-a-half times the height of a human being. They are quadrupedal ground units of a similar design to the HK-Centurion. Spider Tanks have two arms, each equipped with a forward-facing and rear-facing plasma cannon.

A Spider Tank is stored in the belly of an HK-Aerial for transportation.

During the raid on Los Angeles, when John Connor and Kyle Reese rushed to enter Skynet's facility that housed Time Displacement Equipment, a falling HK-Aerial dropped a Spider Tank in front of them. After a brief battle, Skynet Core in Colorado was destroyed and all the machines were shut down, including the Spider Tank. Terminator Genisys 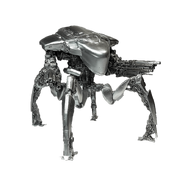 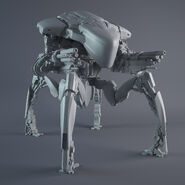 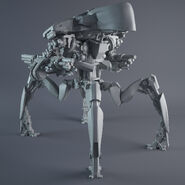