Edit
watch 03:36
Wiki Targeted (Entertainment)
Do you like this video?
Play Sound
The name or term "Skynet Central" should not be confused with Skynet Central Command.

Skynet Central is the Skynet headquarters in the city ruins of San Francisco. The base was surrounded on all sides by a massive wall and automated defense systems designed to target and destroy any living being that passed into the zone.

Skynet Central had become completely automated and there were no refugee humans still alive in the region; only human prisoners who were being experimented upon in the upcoming Series 800 Terminator development project. Skynet also maintained a full laboratory in the area from which it continued the research of Serena Kogan.

In 2018, John Connor embarked on a solo mission to infiltrate Skynet Central in order to rescue Kyle Reese and other captured civilians from Skynet with the aide of Marcus Wright. It was obliterated during the engagement after Connor detonated the fuel cells of the Terminators in the Terminator Factory beneath the facility. Terminator Salvation 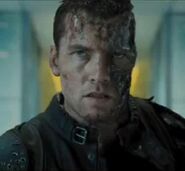 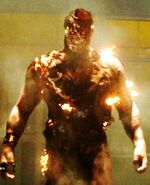