Shirley Manson is a Scottish musician and actress. She portrays the terminator Catherine Weaver and its human model template in the television series Terminator: The Sarah Connor Chronicles.

Manson is best known as the lead vocalist of the band Garbage.

Manson was born in Edinburgh, Scotland, in 1966 to John and Muriel Manson, a geneticist and former big band singer respectively. She was named after an aunt who was named after Charlotte Brontë's novel Shirley. She was born middle-child between older sister Lindy-Jayne and younger sister Sarah, and was brought up in the Stockbridge area of the city. Manson learned to play the piano at age seven, and later attended the City of Edinburgh Music School, the music department of Broughton High. She also was a Brownie and was a member of the Girl Guides.

Shirley: Well, it's a very very different experience for sure. I think when you are a singer like I am, it's a very selfish occupation in a way. You just follow your gut and you do whatever you really want to do. And everyone else has to follow along in your wake, so to speak. Then when you come into a cast as an actor — I mean I'm very inexperience so I'm probably not the best person to discuss the craft of it — but from what I observe, you have to be very aware of what is going on around you. When I came home from the first day of filming I was exhausted mentally. Because I realized you have to pay attention all the time. I've been so un-used to that because...(audience chuckles)...musicians don't have any focus. You get a piece of paper under your door in the morning telling you exactly what you're going to do — literally in increments of ten minutes. So you don't have to remember anything, but as an actor you have to be 100%...like in the moment and that's really hard.

Garrett: I'm going to try that. (everyone laughs)

Shirley: But you're all experienced, don't give me shit. (everyone continues to laugh)

Shirley: Oh, thank you. From my stand point, I feel like I sort of married up. I feel like I got a new band, but they are younger and better looking. (everyone laughs)

Moderator: And I have to ask her — just talking backstage about this — about how awesome that scene was where you decimated that warehouse full of people, how was that for you to get to do? (audience applauses loudly)

Shirley: Well, I was saying to Josh earlier on, you know when I watch the episodes, I watch them in real time with you guys. I spend most of the time criticising myself and feeling very self-conscous. But in that scene, I sat there and I was thrilled and I totally believed in myself. I got so lost in it, I was like: Wow, I am scary badass! (audience laughs and claps) 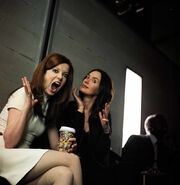