Edit
watch 01:33
Wiki Targeted (Entertainment)
Do you like this video?
Play Sound
"Serena" redirects here. For the I-950 Infiltrator, see Serena Burns.

In 2003, Serena was dying of terminal cancer. While working for Cyberdyne, she was head of Project Angel, which sought to use cybernetics to prolong and save human lives. After the success in a laboratory mouse, the project began to used the bodies of executed prisoners who had donated their bodies to medical research. One of these subjects was Marcus Wright, who Serena approached multiple times to attempt to get him to give his consent. She received it on the day of his execution in exchange for a kiss. She accepted, and assisted at his execution. Her face was the last thing he saw. Terminator Salvation

War against the Machines[]

Sometime after Marcus' execution, and near death, she received a mysterious communications in her computer from someone who claimed they could save her. That other person (who it later was revealed was a future Dr. Kogan) gave her a formula to delay her death. She used it herself, and later sold it, using the money to build a large advanced laboratory, where she began experimenting in creating cyborgs.

Some time later, she was dying in a hospital when three Terminators sent from the future rescued her, escorting her to the lab and putting her in a cryotube.

After Judgment Day, her research was used by Skynet to turn humans into cyborgs, one of which was Marcus, who was used as a Prototype Infiltrator. When Marcus was in Skynet Central, Serena's image was pulled from his mind and used to communicate with him by Skynet. Terminator Salvation

Later, she was awakened and converted into a T-H Hybrid Human with her remains from the cryohibernation capsule. Terminator Salvation: The Final Battle #01

After finding the Terminator who killed John, John brought the machine to the Time Door. Serena used Kate Connor's voice, since she did not have John's voice sample, to assign its mission priority before sending it back to 2004.

At a certain point, Serena helped John Connor by creating an outer sheath based on his original human appearance with living tissue. In addition, by using the DNA sample of John, Serena was able to make the Connors have their second child, Sarah. Terminator Salvation: The Final Battle #12 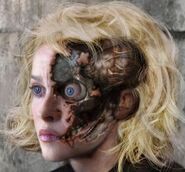 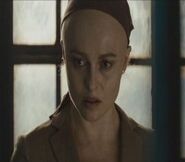 Serena Kogan as a hybrid, featured in a deleted making scene from Terminator Salvation.

Serena Kogan as a cyborg, featured in a deleted scene from Terminator Salvation.

[Serena meets with Marcus Wright for the last time before his pending execution]
Serena: Marcus... How are you?
Marcus: Ask me in an hour.
[Serena sits down on a stool]
Serena: I wanted to try one last time.
Marcus: You should've stayed in San Francisco, Dr. Kogan.
Serena: You have a chance to be part of something wonderful. Through my research, you can have a second chance to live again.
Marcus: What makes you think I want a second chance? My brother and two cops are dead because of me... Ah, but I'm not the only one with a death sentence, am I? You think I can cure your cancer, Serena?
Serena: I'm not worried about myself. I'm worried about the future of the human race.
Marcus: I'll sell it to you.
Serena: For what?
Marcus: A kiss. [Serena nods, Marcus kisses her] So that's what death tastes like.
[Marcus signs the consent form and Serena leaves the cell]
Serena: You've done a very noble thing today, Marcus.
Marcus: I'm guilty. Just cut me up until there's nothing left.