Savannah Weaver is the daughter of Lachlan and Catherine Weaver.

Savannah's parents, Lachlan and Catherine, died when she was very young and a T-1001 subsequently stole Catherine's identity.

Due to the T-1001's difficulties to obtain a normal relationship with Savannah, and thus maintain its cover, psychiatrist Boyd Sherman was consulted. "The Tower Is Tall But the Fall Is Short"

On the anniversary of Lachlan's death, Catherine Weaver didn't recognize the emotional needs of her daughter, and left her on her regular daily schedule. After a conversation with James Ellison, who described how he dealt with his own father's death, Weaver recognized that it was important to bond over grief, and had Savannah brought to her office. Seeing Savannah crying, Weaver tried to sympathize with her, using Ellison's own story as her own, as a way to try to relate in grief. Eventually, Savannah is convinced to sit on Weaver's lap, realizing that her lap is cold. Weaver's attempts to demonstrate further human emotions were not entirely successful but were a gradual step toward building a bond with her "adopted" daughter. "Desert Cantos"

One day, Savannah wanted to play hide-and-seek with her "mother", but she was too busy. Suddenly, a number of opening doors led Savannah to John Henry, who was willing to play with her. John Henry later refused to reveal her exact location to James Ellison and Catherine Weaver, choosing instead to follow the rules of the game, namely to provide clues to her whereabouts whenever Ellison and Weaver were able to guess what object he was currently thinking off. Savannah hid in a helicopter on the rooftop the whole time before Ellison realized where she was and found her along with security and a somewhat passive Catherine Weaver. "Today Is The Day, Part 1"

Savannah and John Henry developed a very close relationship following their meeting. They would regularly chat online and John Henry would call her from time to time. It was one of these phone calls that would serve to save Savannah's life when a T-888 posing as a water delivery guy went to the Weaver house to find Savannah. Following John Henry's instructions, she was able to hide long enough for John Connor, Sarah Connor, Cameron, and Derek Reese to rescue her. She was then taken with the Connors to a secured location for her own protection. She would reveal to John Connor about John Henry leading to Sarah Connor wanting to meet Catherine Weaver in exchange for Savannah's return. This would result in Sarah being arrested during the return. "Adam Raised a Cain"

When Catherine Weaver went to the future with John Connor, she asked James Ellison to pick up Savannah from gymnastics. "Born to Run" 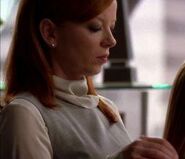