(See Behind the Scenes)

RoboCop versus The Terminator issue 1

Detroit Police DepartmentResistance (Future; replicant)Skynet (Future; brain)
Alex James Murphy was once a human police officer who was killed in the line of duty by a vicious gang of criminals and transformed into a cyborg by the mega corporation Omni Consumer Products. This new creation, RoboCop, would serve as the prototype of next generation police officers and the process would be instrumental in the creation of Skynet.

RoboCop vs. The Terminator[]

Targeted by the Resistance[]

Florence Langer, a Resistance soldier, travel to the present day from the Future War to murder Alex Murphy as she had been told by Connor that it was a human mind that turned Skynet from a tool to an "army of murders". During a brief confrontation, the group was attacked by a group of Series 800 terminators. Murphy soon learned that he was a key component of the Skynet program and that his neural network gave Skynet the ability to develop artificial intelligence. Rather than be an agent of destruction, Murphy opted instead to terminate himself. While visiting his grave a final time he is attacked by a modified Infiltrator resembling a child and another that looks like a dog. Murphy is disabled and his program scanned into Skynet. RoboCop versus The Terminator issue 3

After 25 years of lurking in the shadows of Skynet's programming, Murphy began an attack upon a Skynet program and took control over an automated production facility during a human attack. Utilizing his new found control, he built himself a modified T-800 combat chassis resembling his former self. RoboCop versus The Terminator issue 3

Later, he would do the same again, but would construct an entire legion of EndoCop — Terminators based on his neural pattern. With their new allies, the Resistance launched an attack on a Skynet outpost while Murphy made plans to go back in time and stop Skynet once and for all out of fear he had begun to lose his humanity after years trapped in the mind of Skynet's evil. RoboCop versus The Terminator issue 4

Upon the appearance of the strange blob in the present, the people are confused and then terrified as the metal RoboCop tears forth from the mass of flesh and immediately blasts off into space. He finds the earliest incarnation of Skynet, a spy satellite, and destroys it. Disappearing from time, Murphy awakens in his present in Detroit with a feeling of deja vu while on patrol. RoboCop versus The Terminator issue 4

In an attempt to alter history and ensure the destruction of the T-800, Robocop enlists the aid of Omni Consumer Products CEO Richard "Dick" Jones, and relocates everyone to a group of OCP naval ships located in the ocean in order to minimize large-scale casualties. Jones's research into a specialized acid is entering its final phases until the T-1000's assault on the naval group. Terminator/Robocop: Kill Human issue #3. During the assault, John Connor is trapped and killed in the research room with Jones, the T-1000, and a reactivated T-800, while Robocop seals the door to ensure the Terminators' destruction. Some time during the chaos, Sarah Connor disappears, while RoboCop himself perishes during the sinking of the ship. Terminator/Robocop: Kill Human issue #4.

RoboCop versus The Terminator 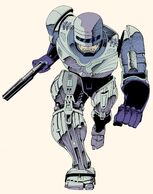 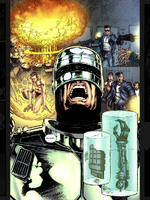