A plasma cannon refers a range of cannons which are plasma-based during the Future War.

HK-Aerial Mark 7 and Mark 8 were equipped with plasma cannons. The Terminator (Frakes novel)

The Habitat had developed mobile charge plasma cannons with 10 times the range of normal plasma assault rifles. "The Battle of Cuba"

During the final assault on Thunder Mountain, Tim found a Mark-108 Plasma Cannon and used it as a reinforce to assist John Connor, who was about to destroy Skynet Computer Core. The Burning Earth issue 5

In 2029, the Resistance Phoenix Team recovered the ACE Battle Armor, which was equipped with 40-watt Phased Plasma Cannons. The Terminator: 2029

In order to destroy the Meta-Node in 1988, a Resistance commando had to gather parts in Cyberdyne Systems Laboratory to complete the V-TEC Phased Plasma Cannon, which he would used to terminate the Meta-Node successfully. The Terminator: Rampafge

The plasma cannon was one of Model T-X's onboard weaponry.

In 2029 of Kyla's World, Resistance unit Red One was wiped out by ten T-X Endoskeletons with plasma cannons outside Colorado Springs, Colorado. Terminator 3: Rise of the Machines (novel)

During her mission in 2004 (2003), the T-X had used plasma cannon for various times. The T-850 sent by the Resistance was once hit by plasma cannon, which damaged one of its hydrogen fuel cell. However, the T-850 was managed to destroyed the T-X's plasma cannon with RPG when she attempted to kill Kate Brewster. T-X later switched its default weapon into IAD-ChemTech in Rise of the Machines timeline. Terminator 3: Rise of the Machines While in Kyla's World, the T-X studied the damage for a few milliseconds before her diagnostic-repair processor immediately devised a solution. With her free hand, she twisted and bent the various plasma magnetic containment conduits into a new, much smaller, cruder transmission head. Only a fraction of her available power could be transmitted with the new arrangement, but the repaired weapon would still be formidable. Terminator 3: Rise of the Machines (novel)

In 2016, John Connor piloted an HK-Tank and use its plasma cannon as well as Gatling gun to destroy T-600, T-7T, and anti-aircraft turrets of a Skynet facility in Los Angeles. Terminator Salvation (video game) 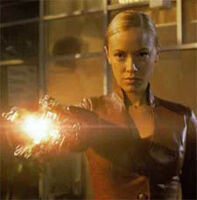 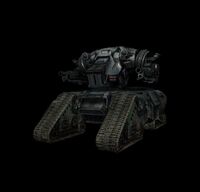 HK-Tank in 2016 from Salvation timeline