(Skynet)
The Nightmare Terminator was a dream figure in Sarah Connor's nightmare.

The police have caught up with Sarah Connor and her son, John and confront them while Sarah is picking John up from school. While both of them are locked in separate police cars, the nightmare Terminator appears. He initiates a shootout with the police by shooting one of the police cars using a sawed-off Mossberg 500, then pulling out two MP5s, and Sarah and John manage to escape from their respective cars. She then sends him running away from the scene. To Sarah's horror, however, the Terminator pulls out a Desert Eagle which he uses to shoot John in the back while he is running. Sarah rushes to his side, but it is too late; John is dead.

In the background, a nuclear bomb goes off, and the skies darken. The heat blast burns off the Terminator's skin, and his endoskeleton starts to march towards Sarah. When he reaches her, he grabs her by the throat and starts to strangle her. Before the nightmare ends, the camera zooms in on the endoskeleton's frightening skull and glowing red eyes. "Pilot" 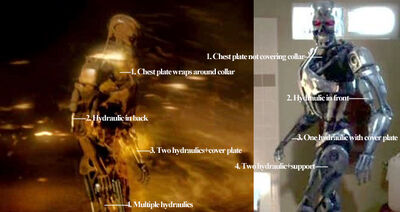 The Nightmare Terminator shooting at the Police

The last image of Sarah's nightmare