Terminator Wiki
Register
Don't have an account?
Sign In
Advertisement
in: Actors, Cast/Battle Across Time, Cast/Dark Fate,
and 3 more
English

Actress, Director, Producer
Linda Hamilton is an American actress who portrays Sarah Connor, the mother of future savior of humanity John Connor, in the Terminator franchise.

Linda Carroll Hamilton was born September 26th, 1956, in Salisbury, Maryland. Following high school, Linda studied for two years at Washington College in Chestertown, Maryland, before moving on to acting studies in New York. In New York, she attended acting workshops given by Lee Strasberg. Her first parts where small parts in television series, with her biggest break coming with her role as Sarah Connor in The Terminator (1984) and its sequel Terminator 2: Judgment Day (1991). Most known to the public at large from her part in the television series Beauty and the Beast (1987) in addition to Sarah Connor. 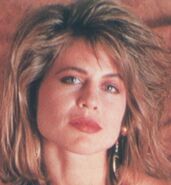