Sergeant Kyle Reese is a Resistance soldier from the Tech-Com, serial number DN38416. From 2021 to 2027, he served with the 132nd under Justin Perry. In 2027, he joined the leader of the Resistance, John Connor's Tech-Com fighting unit, where he was assigned recon/security. In the year 2029, he was sent back in time to the year 1984 to protect Sarah Connor from a T-800 Model 101 Terminator. Kyle Reese was the father of John Connor, through the result of a predestination paradox.

Kyle Reese was a Resistance soldier in the post-apocalypse future, where most of humanity had already been wiped out in a deadly nuclear Third World War, sparked off by an artificial intelligence entity known as Skynet. The computer system launched another genocidal war on the survivors of the war between the Eastern Bloc and the West. Born during or after the first wars around 2003, Reese was one of the last remaining humans who achieved a victory over the machines.

He survived the capture and killing of his fellow humans only to serve as a slave in one of Skynet's concentration camps, where he and others were forced to load huge numbers of dead bodies into Skynet's furnaces to be incinerated. Reese's freedom would come when a Tech-Com, a resistance movement, led by John Connor (whom Reese would unwittingly father later in the movie and ironically consider his closest friend), freed him and the others from Skynet. After leaving the camps, Reese served in the 132nd division under Justin Perry from 2021 to 2027 before transferring as a sergeant to Tech-Com under John Connor himself. John Connor and the resistance would eventually rally enough remaining humans and resources to launch an assault on Skynet.

The final assault would eventually allow the human resistance to cripple Skynet. The Resistance was able to smash Skynet's defense grid allowing them to enter Skynet's main complex and attempt to destroy it. Skynet however would have a final move left: using time displacement equipment, Skynet would send one of its most feared machines (the Terminator) back to May 12, 1984, a Thursday, to kill the young Sarah Connor, known to have been the eventual mother of John Connor, the leader of the Resistance, and thus prevent the birth of Connor and his future rebellion. The Terminator The Terminator: Dawn of Fate

Realizing what Skynet was attempting to do, John Connor sends a soldier to protect himself from the machine menace. It would be Reese who would volunteer himself to go back. Once Reese had gone through, the time travel equipment would be destroyed, leaving only Reese and the Terminator in 1984.

Arriving unarmed and not knowing what the Terminator looks like in its disguise, Reese quickly dresses, arms himself with a shotgun and sets out to track the woman he has been assigned to protect. After finally tracking Sarah to a club at the same time as the Terminator, he rescues her and in the ensuing chase, introduces himself and tells Sarah the reason why the Terminator is hunting her, the impending doom of the human race and the future significance carried by her and her unborn son, but they are subsequently captured by the police after the Terminator's car crashes and Sarah and Kyle are surrounded. With the Terminator having fled the scene, Reese is questioned by criminal psychiatrist Dr Peter Silberman, who puts Reese's story of the Terminator and the Future War down as nothing more than a psychotic delusion, although complimenting the scale of it due to the explanations for the lack of future technology. Although Sarah briefly doubts Reese herself, when the Terminator attacks again, Reese manages to escape and retrieve Sarah while the Terminator tears through the station staff.

Having grown up in the future where the machines had all but wiped out the human race, Reese is both physically and mentally hardened. His body is scarred from numerous battles with Skynet, and he has a number of burns as a result of the time travel process. In a deleted scene, when he tries to stop Sarah from going to Cyberdyne Systems, he sees something he has never seen before, what the world looks like before the War Against the Machines. He says he thinks of it as a dream, the trees and stream, the flowers, and Sarah, all beautiful. Bursting into tears, he confesses that it hurts, because he wasn't meant to see this. He then agrees with Sarah that they should try to change the future.

Though hard and battle weary, Reese had a love for Sarah despite having never met and only through a photo could identify. The affection Reese felt for Sarah was based on the legend that surrounded her and on the image of her from the photograph given to him by John Connor. Though initially hostile towards Reese, Sarah grows to trust and love him as he becomes the only thing between her and the Terminator. On the run from the Terminator, Reese and Sarah share a night of intimacy, in which her future son and human leader John Connor is conceived.

However, Reese's life is cut short when both he and Sarah are forced to confront the Terminator. A chase ensues with the Terminator following first on a motorcycle and then in a semi-tanker truck. During the chase, Reese is hit by gunfire. After apparently thinking that they destroyed the Terminator, they run to an automated factory, later revealed to be owned by Cyberdyne Systems where the now-metal endoskeleton of the Terminator pursues them inside. Kyle turns on all the equipment as cover while the Terminator batters its way through the door.

After Sarah accidentally turns on a machine, their hiding place is discovered and the Terminator finds them. After reaching the stairs of a crawlway, Reese tells Sarah to run for cover while Kyle tries to beat the Terminator with a metal rod. The Terminator slashes Kyle to the floor, and Reese reaches for a pipe bomb and lights it up, placing it into the Terminator's abdomen. The Terminator explodes except for its lower midsection and Reese rolls down a metal stairway head first. A short time later, after Sarah removes a piece of shrapnel from her leg, she tends to Kyle and finds he had broken his neck,[2] his dead body with face covered with blood from the fight with the Terminator and the shrapnel/debris from the explosion.

However, the Terminator's midsection is still functional and begins to chase Connor again. Sarah then crushes the Terminator in a mechanical press and later tearfully sees Reese's dead body being zipped up in a body bag and taken away. Although Reese died not knowing Sarah was carrying his son that was his future commander, his strength and courage gives Sarah enough for her to teach her unborn son for the pending future he will bring.

By impregnating Sarah with John, Kyle created a predestination paradox in the same way that the discovery of the Terminator's remains in the factory gave birth to Skynet. The Terminator

Kyle was separated from Tim, his younger brother when Tim was six years old. The Terminator (NOW Comics)

Kyle and Mary Shea, his mother, were captured by Luddite Patrol A-36 under the command of Sam Marshall AS-783490 and delivered to a Century Work Camp to serve as slaves. Dennis Reese and John Connor led an assault against the Luddite extermination camp three years after Mary and Kyle were captured. Mary and her husband were killed by a Terminator during the assault on the camp. John Connor came out of the smoke and said "Come with me if you want to live". T2: Future War

He is later adopted by John Connor and Tara Holden. He is urged to fight but prohibited by Tara because a reason which cannot be told. Issue #1 He travels back to 1996 accidentally during a battle against the Dire Wolf. Issue #4 He helps John, Sarah, and young John to destroy the Dire Wolf. Later, he and John travel back to 2015 via the remains of the T-Infinity. After the War, Kyle has his own family in 2032. Issue #5

Kyle Reese, a sixteen year-old, is Skynet's priority target in 2018, and John Connor is trying to find him in order to protect him.

At a certain point in post-Judgment-Day Los Angeles, Kyle has been working closely with Star, a young mute girl, and the two have developed a close working friendship which is based upon hand signals. Shortly after the activation of Marcus Wright, Kyle rescues him from a Series 600 Terminator that attacked him, destroying it in front of an old toy company. The two developed a working relationship soon after with Marcus teaching him several tactics to survive. He is not yet a member of the Resistance and is listed as being of civilian status according to General Ashdown, but Reese considers himself and Star to be the Resistance's Los Angeles Branch.

After spending the night at Griffith Observatory, Reese, Star, and Marcus set out in a jeep to find John Connor. After a brief chase with a Skynet probe that scans Kyle's face, they briefly stop at a believed to be derelict 7-Eleven in the desert, but they find themselves with a group of survivors led by a woman named Virginia. They are offered food and supplies, but their rest is short lived when they are attacked by a Harvester. After Marcus stuns the heavy machine, Kyle is instrumental in trying to destroy the Moto-Terminators now giving them chase from his vantage point on the tow truck. This would be futile. Reese as well as Star were soon after taken hostage by Skynet and taken to Skynet Central aboard a transport. While underway Kyle would try to keep the troops rallied and looked for anything that could be considered a weapon.

Upon arrival, however, he was separated when Skynet identified him and taken to an execution chamber. His quick thinking helped him in escaping from the Series 600 Terminator assigned to guard him and he was soon reunited with Star. Moments later, he would meet John Connor for the very first time, only to be attacked by the T-RIP, a prototype Series 800 Terminator sent to kill Connor. They would escape to the Terminator Factory where Kyle would work closely with Connor to build a bomb capable of destroying the machines along with the whole facility. Kyle was rescued by the Resistance and left alongside Connor and the rest of his squad.

Back at a Resistance outpost after the destruction of the Skynet Central, Kyle is among the people watching John Connor, who is mortally wounded in the battle. John gives his jacket to Kyle before Marcus decides to provide his heart to John for the transplant surgery.

After burying Marcus' body, Kyle finds a snapshot of Sarah Connor in the jacket given by John. Terminator Salvation

Kyle Reese barely survived being killed by the T-800. He was then held by government officials curious as to his knowledge of the future, before they were replaced by Terminators after Judgement Day. He managed to survive to 2029, where he meets a friend of his, named Ben and warned him to go into the past to save him after his capture. Ben contacted Sarah, and together, they rescue Kyle from a government facility. Unfortunately, Kyle was soon killed by another Terminator sent to kill Sarah.

"Your son gave me a message to give to you. Made me memorize it. Thank you, Sarah, for your courage through the dark years. I can't help you with what you must soon face, except to say that the future is not set. You must be stronger than you imagine you can be. You must survive or I will never exist. That's all." The Terminator 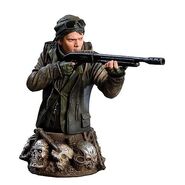 Retrieved from "https://terminator.fandom.com/wiki/Kyle_Reese?oldid=92598"
Community content is available under CC-BY-SA unless otherwise noted.