Terminator Wiki
Register
Don't have an account?
Sign In
Advertisement
in: Characters, Terminator 3: Rise of the Machines characters, Alive,
and 10 more

Tech-Com unit of the Resistance

Rise of the Machines / Salvation

Prior to Judgment Day[]

Kate grew up before the war, living in ignorance, and she was the only daughter of Lieutenant General Robert Brewster, who later become the military director of CRS Autonomous Weapons Division. When she was eighth grade, Kate met John Connor. The pair attended school together and possibly had a romantic encounter in their younger days.

Kate's mother divorced her father and left them when she was still at veterinary school. After finishing school, Kate went on to become a veterinarian, working at the Emery Animal Hospital and became engaged to fiancée Scott Mason.

In 2032, her husband, John Connor, was killed by a T-850. Kate did, however, manage to reprogram the machine to travel back in time to July 24, 2004 to save John and her younger self. Terminator 3: Rise of the Machines (video game) Terminator 3: The Redemption

In 2029, upon learning Skynet had developed a new model of Terminator after an elite Resistance unit was wiped out by it, Kate Connor head to the Cyber Research Systems main facility in Edwards Air Force Base with John Connor and a Tech-Com team to activate a T-850. After programming and activating the T-850, John and Kate sent the protector through the Continuum Transporter to the year 2004. Terminator 3: Rise of the Machines (novel)

In 2004, her normal life was to change. Upon reacting to an animal emergency at the Emery Animal Hospital, Kate met John Connor, with whom she had previously attended school and with whom she had experienced her very first kiss. He had broken in to steal some medicine and equipment to heal his motorbike injuries and held her at gunpoint. After distracting him with an empty pill bottle, Kate took the gun and shot him twice, revealing that the gun was actually a paintball gun and locked him in a dog cage. With John Connor and a reprogrammed 850 Series Terminator, Kate managed to escape a T-X which had been sent back in time to eliminate her. Practically kidnapped by both John and the T-850, Kate learned that the T-X murdered her fiancé as well as the truth of things to come; of Skynet and of Judgment Day. Setting off with the others to the Cyber Research Systems facility to try to stop her father from activating Skynet, Kate was unsuccessful and her father was killed by the T-X.

Getting to the Crystal Peak Control and Command Center, a hardened fallout shelter facility in the Sierra Nevada Mountains for VIPs, Kate and John were able to survive Judgment Day as the nuclear missiles fell. Using the communications equipment within the facility, Kate helped John to get in touch with survivors and co-ordinate a Resistance force. Terminator 3: Rise of the Machines

In 2007, Kate was killed at Crystal Peak. Terminator 2: Infinity

During the war, Kate married John and became Kate Connor. She was one of the two medics in John Connor's unit prior to his promotion to be one of the Resistance leaders. She constantly begged John to allow her to be a field medic. She already knew that the men and women under her husband's command respected her as a leader as well, but she felt that she had to prove that she could also lead in battle. He still refused, prompting Kate to defy his orders to stay at the base. She instead tagged along with Barnes' squad during a battle to capture one of Skynet's facilities, the battle that would lead to John's promotion. However, shortly before the battle took place, Kate realized that she was pregnant with John's child.

Kate was a high-ranking member of the staff of John's Resistance Base in 2018 and served as one of the Base's Doctors. Following his accident, Marcus Wright was brought to her and she attempted to mend his injuries — learning that he was a Terminator in the process. She conducted an examination of the machine and reported to Blair Williams that John had decided to dismantle Wright rather than let him live. She also tried to reassure John that his father, Kyle Reese, would be fine despite being a target of the machines.

When John decided to launch a rescue mission, she initially tried to talk him out of it, but eventually relented. She quickly asked what to tell his men when they find out he went alone, he replied "I'll be back". After the destruction of Resistance Headquarters by Skynet, Kate ordered the mission to Skynet Central to rescue John. When John is brought back by Marcus and Barnes, he is mortally wounded. Kate ordered Blair to land the helicopter on a safe spot and ask the surgeon team to stand by. Later, she gives John a heart transplant surgery with the help of Marcus, who gave his heart to save John's life. Terminator Salvation

Terminator 3: Rise of the Machines[] 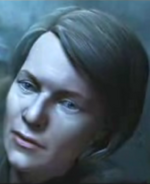 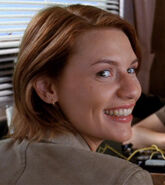 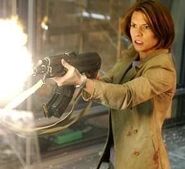 Katherine defending herself and John against a CRS Labs Hunter-Killer 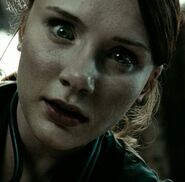 Kate (screaming at the T-X): JUST DIE, YOU BITCH!

(In the truck, with Kate in the back being held prisoner)

Terminator: Katherine Brewster? Have you sustained injury?
Kate: Drop dead, you asshole!
Terminator: I am unable to comply.

(John and the Terminator discussing Kate after it is revealed she is John's future wife):

Terminator: Your confusion is not rational. She's a healthy female in prime breeding age.
John: I think there's a little more to it than that.
Terminator: My database does not encompass the dynamics of human pair-bonding.