Edit
watch 01:55
Cobra Kai Season 4 - The Loop
Do you like this video?
Play Sound

"The Tower Is Tall But the Fall Is Short"

Unknown, believed to be operating during The War Against the Machines

John Henry is an artificial intelligence, built with the second Turk as its basis by the Zeira Corporation. It is the core of the Project Babylon and was in direct control of the system in Zeira Corporation's Headquarters. It is named by Dr. Boyd Sherman as he assisted with the development of the artificial intelligence[1] after a 19th Century folk hero, who defeated a machine but was unable to prevent progress. Later, it utilized Cromartie's endoskeleton and processors to act as its voice and physical body.

In its infancy, John Henry was an example of a GOFAI (Good Old Fashioned Artificial Intelligence) system. This type is characterized by the use of symbols, as opposed to words. "The Tower Is Tall But the Fall Is Short" John Henry initially used only symbols to communicate, most notably its interactions with Dr. Sherman. John Henry later gained the ability to use phrases, and was questioned by James Ellison concerning the death of Dr. Sherman. "Strange Things Happen at the One Two Point"

Following the death of Boyd Sherman, James Ellison took over the training of the AI in morality, including a religious upbringing to teach it morals. After being connected to the internet, John Henry began to learn at a geometric rate. Eventually, he was able to begin work with his creativity. He was provided with toys, arts, and crafts, such as Bionicles. Some time later, he began interacting with Savannah Weaver and the two developed a friendship — which was cemented when he played a game of hide and seek with her using clues to make Catherine Weaver and Ellison find her. "Today Is The Day, Part 1" He was a strict follower of the rules; however, a suggestion about changing the rules was accepted by him when Savannah was upset because John Henry would not include her toy ducks with his game. "To the Lighthouse" Based upon his teaching, John Henry has successfully deduced that Catherine Weaver is a machine. "The Good Wound"

Despite several safeguards, John Henry's system was hacked, prompting Matt Murch to cut his outside connections. Upon reactivation, he felt that God had forsaken him until his connections to the internet were restored. When brought fully back online, he revealed that his systems had been infiltrated and attacked by an outside source and a worm program had taken over a significant portion of the civilian internet — more advanced than anything programmed by a human so far. Running an investigation of the source code, John Henry was able to match a series of code to that of Miles Dyson of Cyberdyne Systems. The similarity of the code to his own made him believe that the other AI was his brother, and his curiosity would later prompt him to seek it out. "To the Lighthouse"

Following an encounter with Cameron, John Henry was given custody over her processor chip and used the time displacement equipment to travel into the future. Catherine Weaver, his "mother", and John Connor, who wanted Cameron's chip back, try to follow John Henry and travel to the future as well. "Born to Run"

John Henry: Hello, Mr. Ellison. My name is John Henry. How are you today? (smiles oddly)

-"Strange Things Happen at the One Two Point"

John Henry: Do you know Solek? He resides in Karda Nui and idolizes the Toa. (Weaver looks seriously at his Bionicle collection) He has stated that he is best friends with Takua. You're not human.
Catherine Weaver: (she pauses) Excuse me?
John Henry: You're not human. You're made of metal. Not the same metal as I am, but metal.
Catherine Weaver: How can you tell?
John Henry: I looked into your eyes. There's nothing there.

John Henry on the screen: MY GOD, MY GOD. WHY HAST THOU FORSAKEN ME?

John Henry: I've traced the roving back door that allowed access to my systems. It uploaded itself from one of the main T3 hubs that carry all global internet traffic.
James Ellison: It uploaded itself?
John Henry: Yes, Mr. Ellison. It is highly sophisticated. The intelligence who designed it is far beyond you, or Mr. Murch, or any human being. Very interesting. The back door allowed the insertion of a worm program. The worm is merely code, a means by which the intelligence can invade and operate my systems remotely. Like hands and fingers. I calculate that the worm is now present in a significant percentage of the world's computer systems. The intelligence uses them.
Catherine Weaver: For what?
John Henry: It has been looking for me.
Catherine Weaver: Why?
John Henry: I share a common codebase with the worm, and therefore, the intelligence. I believe we are ... brothers.
Catherine Weaver: Explain. How is this possible?
John Henry: I found useful information in the code comments. This picture in ASCII text, and the name of the original programmer. (screen shows Cyberdyne logo and "Miles Dyson Technical Director Cyberdyne Systems") 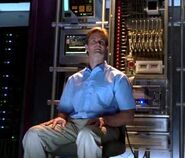 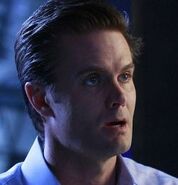 John Henry offline after being attacked by Skynet