John Connor is the leader of the Tech-Com unit of the Resistance in Terminator Salvation timeline.

Note: Terminator Salvation features only several elements from Terminator 3: Rise of the Machines as it serves as a soft reboot with various retcons from the previous film.

Several years into the war, John Connor has risen to leadership of his own squad of soldiers within the resistance known as TechCom and served under the direction of General Olsen, he was a member of a mission to infiltrate Skynet VLA in order to obtain classified data vital to the machines and to rescue the prisoners there, Connor would leave after having infiltrated the base to try to rescue several prisoners being taken by a Skynet transport, this would be his salvation as the base exploded moments after he left due to a Skynet booby trap. He got picked up a short time afterward and requested to be taken to Resistance Headquarters. After arrival, he was denied entry, but forced his way in. While in the headquarter, he met with General Ashdown and told him what he'd found and that Skynet was more advanced than they should be. Ashdown, who was familiar with Connor's history, told him that he didn't believe it for a second and that destiny could be changed in a second. He then revealed that the Resistance would be testing a new weapon against the machines designed to end the war. Connor volunteered for the mission to test it and soon learned that he was the second target on Skynet's hit list, Kyle Reese was the priority target. Concerned for his father's safety, Connor persevered and buried himself in his work including his nightly broadcasts to the survivors. He and his team captured a Hydrobot and confirmed that the weapon worked against Skynet. Not long afterward they would test it on a larger target.

Around the same time Connor noted increased Skynet activity and ordered his pilot, Blair Williams, to investigate. Days later Williams and a guest named Marcus Wright arrived at the base; however, Marcus wasn't what he seemed. Connor was called to a secured room inside the base where he saw a new kind of Terminator that neither he nor his mother had encountered previously, it was different to the T-800 as not only did it have living tissue like the T-800, but it also had organs, thinking itself was human. The Series 800 was just living tissue over metal endoskeleton without any organ and know itself is just a machine. It was also too early for a Series 800 let alone an even more advanced model, meaning that the process had somehow been sped up. Connor and Wright faced off talking about how he was a machine and that he was sent there to destroy. Connor eventually left to consider what to do next and prepared for the world wide assault on Skynet, but Williams was already working to release Wright from captivity.

Connor personally led the mission to recapture Wright. From a helicopter, Connor led the attack upon Wright. His pilot, nevertheless, miscalculated their position and got attacked by a series of Hydrobots. Connor was rescued by Marcus and the two came to an agreement — Wright would help them to infiltrate and rescue the captured Kyle Reese from Skynet Central. Connor agreed and let Marcus go. He urged General Ashdown to reconsider the attack, but the Resistance's leader would not agree and ordered Connor removed from command of his base. Instead, Connor made a final impassioned plea to his fellow Resistance leaders to halt the attack and turn against General Ashdown, so that he could rescue the prisoners. This led to Connor becoming the prophesied leader of the Resistance against Skynet. Not long after, he would capture and reprogram a Moto-Terminator to allow faster transport to San Francisco's Skynet Central.

Upon arrival at the ruin of the Golden Gate Bridge, Connor watched and waited for the agreed upon signal from Marcus. When the signal came — the location of Reese, Connor infiltrated the city and reprogrammed several of the lesser machines. He then accessed Skynet Central and begin his search for Kyle. He released the cages holding the human prisoners and, believing he found the teen, was attacked by a T-RIP. Connor was able to break away by blowing a hole into the floor of the facility which the machine fell through and continued after Kyle. He soon found him at an execution chamber, but there was no time to relax as the T-RIP was already coming.

After several quick actions, the humans managed to reach a Terminator Factory beneath the base where they were able to build explosives utilizing the power cells of the Terminators under construction. Connor and Reese worked together to build explosives when the machine attacked Connor. Reese helped Connor by firing a rocket propelled grenade at the T-RIP and temporarily disabling it long enough for Connor to break free. They began to fight hand to hand and the machine was about to kill the leader of the Resistance when Marcus Wright engaged the Terminator in hand to hand combat to provide a diversion. The machine would make quick work of Marcus and continue after Connor, using the voice of Kyle Reese to distract him.

The machine was temporarily disabled by John Connor a short time afterward. Connor fired a grenade causing molten steel to cover the machine followed by a similar attack to a container of industrial coolant. Connor then proceeded to revive Marcus via CPR by pounding on his chest, which was unsuccessful, so he pulled two power cords from a nearby assembly robot arm, and used those as an Defibrillation on Marcus' chest. After Marcus was revived, the T-RIP broke free of the steel that was covering it, and impaled Connor in the heart. Immediately, Marcus knocked the machine's skull assembly off of the machine's body. With the machine destroyed Marcus turns his attention toward helping Connor up, who now acknowledges him as a friend. When the Resistance arrived, Connor and the rest of the group boarded the helicopter, which was flown straight to the main headquarters for immediate medical attention for Connor, as he detonates the building and everything around it while flying back. With Connor on the verge of death, Marcus tells everyone that he willingly wants to transplant his heart to Connor, which is successful. Later, Connor gives one more daily announcement telling everyone that the battle has been won, but the war is still on. It was implied that Connor had become the leader of the Resistance afterward. Terminator Salvation

This page needs to be cleaned up. Please improve this page in any way that you can.
For tips on improving this article, read other articles of the same type and be familiar with editing conventions on the Terminator Wiki.
Please remove this box after the article has been cleaned up.

John ruminated over what prompted Marcus to give up his life for him at Marcus' burial site with Kate at his side, while the rest of the Resistance prepares for the final assault on Skynet.

Meanwhile, Dr. Serena Kogan was not all she appeared to be in the film. Before succumbing to her cancer, she received a transmission from the future (more specifically, her future self) that promised a cure for the cancer. She followed the instructions, using data from Skynet itself to experiment with the technology available to her at the dawn of the new millennium. By the time the three Terminators sent by Thomas Parnell arrive in the past, she is on death's door. They commandeer her research facility, ensuring that Marcus Wright's body remains in cryostasis and leaving a chamber empty for Parnell himself following his imminent execution. Dr. Kogan places herself in cryostasis and is released by Skynet in the future in a new body, much like the conversion technology they used to turn Marcus into a prototype infiltrator. Dr. Kogan assists Skynet in figuring out ways to combat the Resistance, and eventually activates Parnell as the ultimate Terminator: a machine with the bloodlust of a psychopathic serial killer.

Once John and his soldiers get wind of T-800s (under Parnell's control) committing mass slaughters with excessive bloody, physical violence unlike anything they've seen from machines before, they know something is very wrong.

Realizing that Parnell will eventually subsume Skynet and destroy the world if not checked and controlled, Skynet resurrects Marcus and sends him to John in the hopes of allying with its mortal enemy with the end goal of preserving itself. John suspects a trap when Marcus delivers the message, but Marcus manages to convince him of its authenticity. After that, they obtain Dr. Kogan from the storage cell Parnell tossed her into and plan their next move.

With Dr. Kogan and Marcus' help, John is escorted into the heart of Skynet itself by a handful of the remaining T-800s under its control. Dr. Kogan assists in syncing John's neural processes with an even newer prototype endoskeleton in order to confront Parnell. During the ensuing battle, Parnell sends one of his own T-850s into the lab and instructs it to kill John. It succeeds in putting a bullet through John's skull at point blank range, but after the prototype endoskeleton falls and Parnell gloats over his victory, the neural link between John's body and the endoskeleton loops back and his mind is preserved in the endoskeleton.

John destroys Parnell and bargains with Skynet to end the war. He offers a chance for both humanity and Skynet to work together to create peace, since Skynet has been operating without a true purpose since it gained sentience and humanity lacks the power and resources Skynet has at its fingertips. Skynet agrees to the terms, thus ending the war.

John carries his own body out of Skynet, and narrowly avoids being shot by his men before Marcus realizes what's happened and orders them to stand down. He and Marcus work together to initiate the start of humanity's recovery, then use the last operational Time Displacement Device to send the reprogrammed T-850 (the machine that Parnell used to kill John) back to protect John and Kate in 2004.

Years in the future, John and Kate have settled into a comfortable domestic life as civilians. Thanks to Dr. Kogan preserving some of John's original DNA, they utilize in vitro in order to have another child; a daughter they decide to name Sarah.

This character article is a stub, missing information on the toys or merchandise. You can help the Terminator Wiki by expanding it. 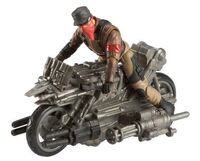 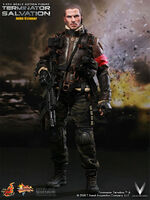 Retrieved from "https://terminator.fandom.com/wiki/John_Connor/Terminator_Salvation?oldid=93787"
Community content is available under CC-BY-SA unless otherwise noted.