Edit
watch 01:43
DC Fandome - The Loop
Do you like this video?
Play Sound

"The Tower Is Tall But the Fall Is Short"

Commander Jesse Flores was a Resistance fighter who once operated under Resistance branch in Perth, Australia but later moved to the North American — arm of the tattered global Resistance. She claimed to have went AWOL but actually left the War against the Machines on a personal mission to destroy the trust between John Connor and the Terminator Cameron.

Activities during the War[]

Jesse pulled Derek Reese out of trouble when he came outside a bunker as he seemed to contemplate suicide, but Jesse prevented the act by alerting Derek that his "fly" was open. The two then entered a gassed bunker to find the sole survivor. On finding the survivor, the two began showing symptoms of infection with the Skynet bioweapon. The three made it back to a Resistance base where they were treated and cured by the blood of the survivor. "Alpine Fields"

Soon after this, it is implied Jesse and Derek begin a relationship resulting in Jesse becoming pregnant. Following the mission of the USS Jimmy Carter that resulted in several deaths, along with her miscarrying, Jesse lost faith in the Resistance, "Today Is The Day, Part 2" especially when John Connor began placing reprogrammed Terminators at Resistance bunkers. She suffered a shrapnel wound to her back she claims occurred when one went rogue and wiped out half the bunker's residents.[citation needed] After this she recruited and seduced Riley Dawson and convinced a "bubble tech" to send them back in time to 2007, probably without Connor's permission, to attempt to force a separation between John and Cameron. "Earthlings Welcome Here"

It appears that the Jesse that time traveled to the past comes from a future that is different from Derek's. "Complications"

She acquired an hotel room in Los Angeles "Earthlings Welcome Here" and later met with Derek Reese, who was sent by Connor to set up a safe house. "The Tower Is Tall But the Fall Is Short" She wanted to be with him until Judgment Day but he initially turned it down because she didn't want to try to stop the war. He later came by to thank her for saving his life in the future and they slept together in her hotel room. She had pictures in her room of Derek and the Connors, suggesting that she had been spying on them. "The Tower Is Tall But the Fall Is Short" Her prior knowledge that Derek and the Connors are working together suggests that her time travel trip was not simply to escape the horrors of the future war.

Jesse later found Charles Fischer, one of the Grays in 2007. She called Derek to meet her and they interrogated him. He completely denied he was Fischer and stated that he was a clock maker. Derek didn't remember him from the future, but Jesse was positive that he was Fischer. Jesse found the younger Charles Fischer to try to make the older one crack. Derek started by plucking the younger Fischer's fingernails off. After the second, the older confessed that he was in fact Fischer but was not here on a mission, and that this was his reward for helping Skynet. Derek was about to kill the young Fischer, but Jesse killed the older one. The two let younger Fischer go and buried the older one. Unknown to them, the older Fischer was actually on a mission to create a permanent backdoor into the military mainframe and the government blamed the younger one. "Complications"

Derek soon confronts Jesse about the photos that she took. She eventually explains that she came back to protect John from Cameron's influence.[citation needed] Unknown to anyone else, however, she is revealed to be working with Riley Dawson, a shelter rat-catcher waif she seduced and brought into the past to use as a sexual foil to place between Cameron and John. When approached by a distraught, Riley pleading for a chance for them to live together after she was thrown out of her foster home, Jesse struck her and ordered her back to John. However, Riley slit her wrists and was hospitalized. Jesse had her taken out, putting the place in lockdown. "Earthlings Welcome Here"

It was revealed that Jesse's reason for bringing Riley into the past was to get close to John and frame her for being a security threat to the Connors, which in turn would cause Cameron to kill her. When Riley figured out Jesse's intention before the plan could be carried out, she attacked Jesse, causing Jesse to kill her instead of Cameron. "Ourselves Alone" She then dumped her pawn's body in a river, where it is found and labeled Jane Doe. This leads John to suspect Cameron. Later, it is revealed that John has figured out Jesse's plan due to strange behavior and the defensive wounds that Riley exhibited. He surprises Jesse in her hotel room, but spares her life. As she attempts to leave, Derek confronts her, telling her that she is not "his" Jesse, thus confirming that she is from a divergent timeline. Derek then tells her that John Connor let her go, but states that he is not John, aims his handgun at her, and appears to pull the trigger."Today Is The Day, Part 2"

Note: There is a click of the mechanism, but no shot is actually heard or shown, so Jesse's fate is unclear at the end of the segment scene. 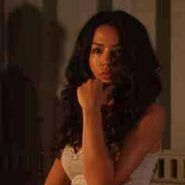 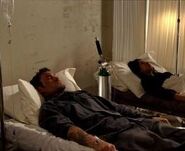 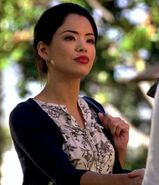 Derek: What about you? What's Connor got you doing?
Jesse: Connor didn't send me back, Derek.
Derek: He didn't? What do you mean? (looking at her scars) That's new.
Jesse: Not to me. There's metal everywhere these days. Looking for us. Working for us. Connor's got at least one in every major base. A big one flipped on us, took out half a bunker. Bird. Cullie. That's from the same shrapnel that killed Cullie.
Derek: How'd you get back here?
Jesse: Cullie's brother. He's a bubble tech.
Derek: He's the same one--
Jesse: Who sent you back. I know.
Derek: Are you AWOL? Jesse, did you run from the war?
Jesse: I need a place to rest.
Derek: You're a soldier. You fight.
Jesse: Not anymore. When everything ends, I want to be here with you. Derek, please.
Derek: I don't want everything to end. Jesse, not again.
"The Tower Is Tall But the Fall Is Short"

Derek: Is this your way of getting rid of me?
Jesse: You'll be gone soon enough.
Derek: What do we need a new word for? I'm pretty sure if I use one of the old ones you'll still do it with me.
Jesse: I might choose to misunderstand.
Derek: The old words.
Jesse: I have a new life, Derek. I want new words. Think of one and I might let you stay. I'm thirsty. Can you get me a drink, please? (stashing surveillance photos under the bed)
"The Tower Is Tall But the Fall Is Short"