Filmmaker, director, producer, screenwriter, inventor, engineer, philanthropist, and deep-sea explorer
James Cameron is the creator of the Terminator franchise, starting from the first film The Terminator. In 1984, he wrote and directed The Terminator, a futuristic action-thriller starring Arnold Schwarzenegger, Michael Biehn, and Linda Hamilton and the film was a huge success. After this came a string of successful science-fiction action films, such as Aliens (1986), Terminator 2: Judgment Day (1991), and Avatar (2010).

The Terminator: From Idea to Movie[]

While James Cameron was on a trip to Rome (Italy),[1] he became very ill with a high fever. One night, he had a terrible nightmare about a chrome-colored skeleton staring at him in a pillar of fire. "It was this chrome skeleton emerging phoenix-like out of the fire"[2]. This was his very first "vision" of the Terminator robot. He sketched out some quick drafts. "He had a kitchen knife and pulled himself along the floor with it, dragging his broken arm. I also sketched the girl trying to get away from it. [...] I thought, 'that was cool'. I've never seen that in a movie before."[2] The film The Terminator later featured a scene with a T-800 endoskeleton and flames in the background. A scene, more similar to James nightmare is in the intro of the film Terminator 2: Judgment Day, where the head of a T-800 endoskeleton is staring through the flames at the viewer. The title poster of T2 3-D: Battle Across Time and many other similar works to come stemmed from those film moments. 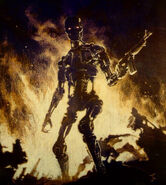 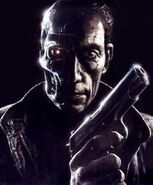